The hunting of polar bears had a long tradition in Norway, with a heyday lasting from the mid-19th century until its protection in 1973. But can we still see the after-effects of large-scale hunting?

The hunting of polar bears had a long tradition in Norway, with a heyday lasting from the mid-19th century until its protection in 1973. But can we still see the after-effects of large-scale hunting? 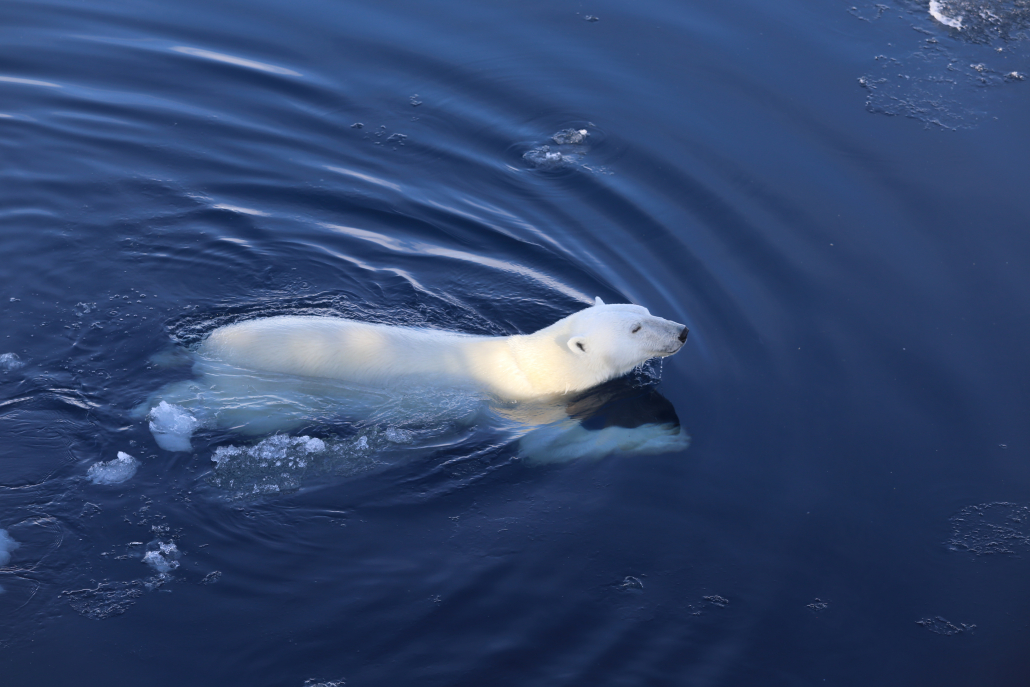 A polar bear is released after tagging and examination east of Svalbard in 1968. Photo: Magnus Andersen / Norwegian Polar Institute

Polar bears were hunted from boats in the ice in summer and by trappers on land in winter. On average, 300 polar bears were caught and killed annually for over 100 years. Eventually it became clear that the harvest was so large that it threatened the stock, and we may still be seeing its after-effects. 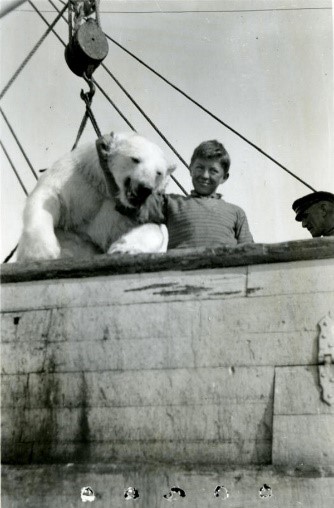 Sources from the 13th and 14th centuries link polar bears and polar bear skins to Norway. Norway’s wealth was at its zenith, and there was ready access to polar bear skins from Greenland, Iceland and drift ice areas in the north.

Svalbard was discovered by Europeans in 1596, marking the start of polar bear hunting in our waters. The scale of the catch increased steadily, and reached its peak in the 19th and 20th centuries.

Before about 1870, catch statistics are lacking, but after this there are relatively good summaries available. Until its protection in 1973, on average, catches of about 300 bears a year were reported, meaning that at least 30,000 bears were taken over the course of a century. The most extreme years were 1907 and 1924 when respectively 888 and 901 polar bears were hunted.

In the interwar period, from 1924 to 1940, there was great interest in hunting, and this is considered the classic hunting period in Svalbard. 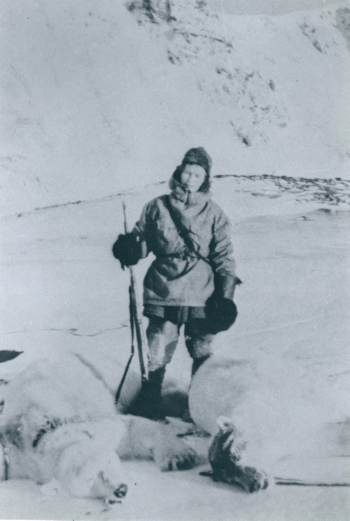 Wanny Woldstad was a female trapper in Svalbard for several years, and shot a number of polar bears. Photo: Norwegian Polar Institute

Norwegian hunting vessels were active in the drift ice around Greenland and Jan Mayen (the West Ice), around Russian areas off Novaya Zemlya and in the mouth of the White Sea (the East Ice) and from Svalbard to Franz Josef Land (the North Ice).

The most important prey species were walrus, seals and small whales, but polar bear skins and live polar bear cubs provided a good supplement. From the end of the period, tourist hunting of polar bears became an important source of income for some boatowners. This entailed one or more tourists hiring an Arctic ship and going out hunting polar bears. By the end of the hunting period, dozens of bears were being shot by tourists annually. 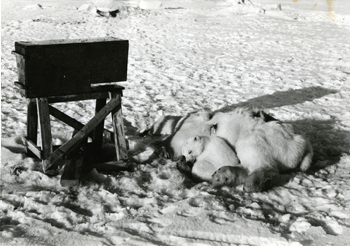 The Arctic ships captured the most

Three times as many polar bears were taken from Arctic ships as by overwintering trappers. It is however the latter who have made the greatest impression on most people. The first overwintering Norwegian trappers we know of from Svalbard were in 1795, but the classic overwintering catch only began in 1895. The target of the overwintering catch varied with the prices of skins. In some periods, fox skins earned more than polar bear skins, and at other times the opposite was true. 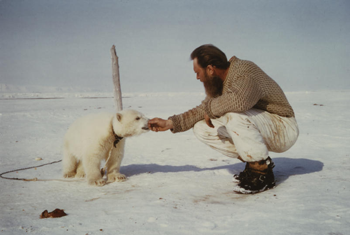 The Norwegian polar bear catch was primarily for the skins, but at certain times exports of live polar bear cubs were also important. They were sold to zoos and circuses around the world and could yield good profits. The price of skins varied a lot from year to year. Seal and bear blubber could occasionally be more valuable than the fur. Immediately after the war, blubber attracted fantasy prices while bearskins were so cheap that they were used for leather. 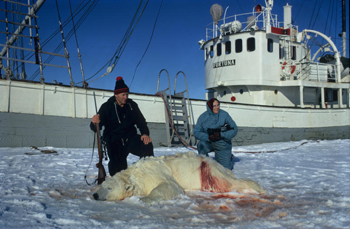 The most common methods for hunting polar bears were active shooting, self-triggered shooting, signal hunting and, for a briefer period, poisoned bait. Self-triggered shooting was a widespread method for killing polar bears. There were several variants, but the principle was the same. A firearm was rigged inside a crate and bait was attached by a line to the trigger. The crate was designed so that the animal had to place its head in front of the rifle muzzle to take the bait. When it went for the bait, the animal shot itself.

Signal hunting was used to hunt from an inhabited cabin. In the area in front of the cabin door, bait was placed, attached to string leading to a bell, tin cans or similar inside the cabin. If a bear came and took the bait, the signal, that is to say the bell or clanking of the tins, would alert the trapper. The bear could then be shot through a loophole in the door.

Poisoning was another method in which strong poison, usually strychnine, was placed inside some bait. The bait was then left out in the open. The idea was that the bear would swallow the bait and die nearby. The bait was either placed on the ground or attached to a pole a bit above ground to prevent animals other than bears taking it. Poisoned bait was not particularly effective and it could also affect dogs, foxes and birds. The use of poison was banned early on in Svalbard (1927), and most trappers were strongly critical of the use of poison. 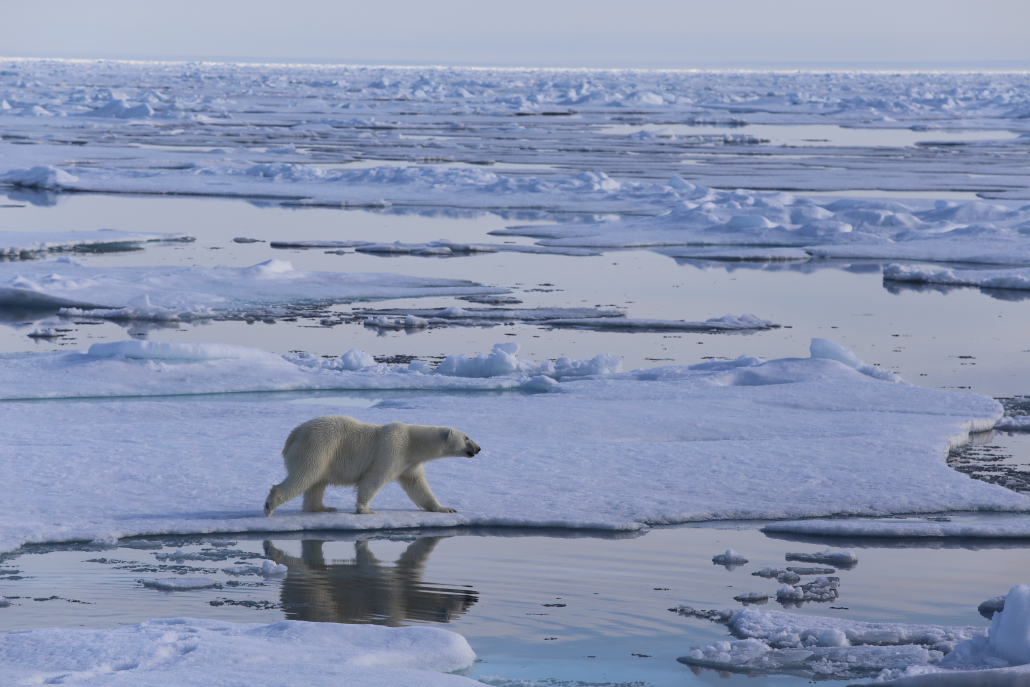 Today we know more about polar bear migration thanks to research. The Barents Sea population, from which the bear in the picture stems, can be divided into two groups based on their annual migration pattern.

Previously, it was widely believed that polar bears had no fixed “home range”, but that they walked in a never-ending circle around the Arctic Ocean. Thanks to polar bear research in Svalbard, we now know much more about bear migration, notably that the Barents Sea population can be divided into two groups based on their annual migration pattern.

Some local bears spend all their time close to the Svalbard coast, while others follow the spread of ice throughout the year and move across the entire Barents Sea. We assume that the same patterns existed before hunting began in Svalbard in earnest, and that all local bears were relatively rapidly exterminated. Towards the end of the hunting period, it was probably mostly bears of the second type, which used the entire Barents Sea as their habitat, and animals from adjacent populations which were shot.

In 1986, it was estimated that the population had almost doubled over the first 10 years since protection began in 1973. In 2004, having been protected for 30 years, the population was estimated at 2,650 individuals. There was most likely an influx of bears from neighbouring parts of the Barents Sea that maintained the stock over the years of harsh extraction.

In the 1960s, there were clear signs that most of the polar bear populations in the Arctic were declining due to strong pressure from hunting. Meanwhile, there was a focus on environmental protection and the importance of knowledge for sustainable management of biological resources.

It was the scientist and trapper Odd Lønø who performed the first systematic studies of polar bear biology around Svalbard. He used data from his own and others’ trapping to describe basic aspects of polar bear biology. At the same time as this work was ongoing, scientists started capturing and tagging polar bears. The possibility of live capture was a major breakthrough for research. The survey showed that several polar bear populations were threatened by the pressure of intensive hunting.

The time was ripe for an international environmental conservation agreement to protect polar bears, and the multilateral Agreement on the Conservation of Polar Bears was signed in 1973. Even today, this backdrop of more than a century of intensive hunting pressure is a topic for consideration in research and management, for which one key question is: How is the Barents Sea population evolving given its history and at a time of major changes in the species’ habitats?

Notify
A hunter fine-tuned for the Arctic

How to avoid conflicts between polar bears and humans?
Scroll to top