Interdisciplinary research in the Arctic

Start of cruise with Research Vessel (R/V) Kronprins Haakon to look at winter processes in the northern Barents Sea and adjacent part of the Arctic Basin.

Start of cruise with Research Vessel (R/V) Kronprins Haakon to look at winter processes in the northern Barents Sea and adjacent part of the Arctic Basin. 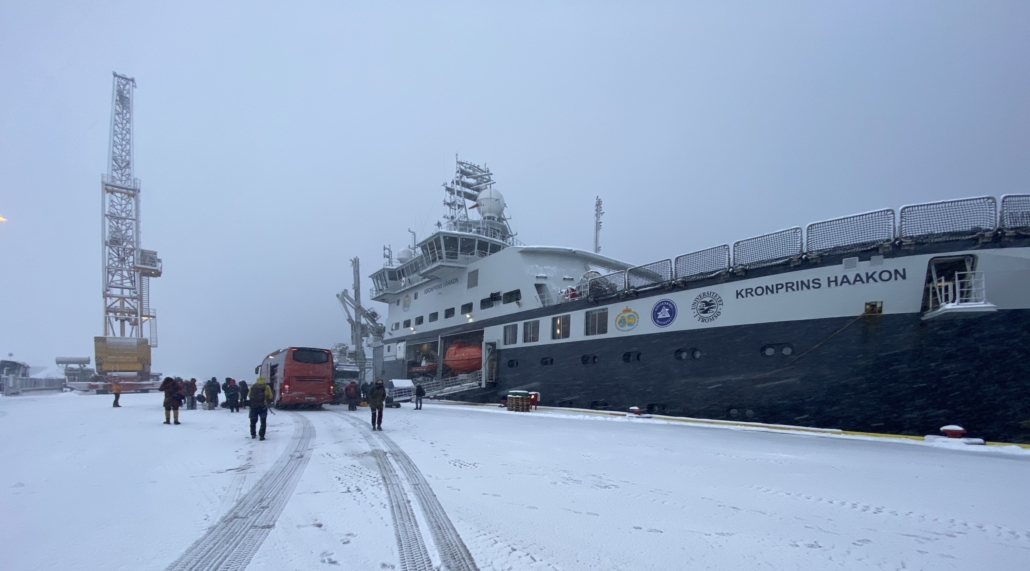 The Nansen Legacy project investigates the conditions and processes in the Barents Sea during the different seasons. After cruises in August (3rd quarter) and December (4th quarter) in 2019, and this cruise in March 2021 will look at the system and processes in the Barents Sea during winter (first quarter). This is why this cruise has the name Q1 cruise. The cruise starts on 2 March 2021 from Tromsø, heading for the northern Barents Sea and the adjacent part of the Arctic Ocean, before returning to Tromsø on 25 March 2021. In March, it tends to be cold in the Barents Sea, with plenty of sea ice present. The sun has just returned after the polar night, and is still  low above the horizon. 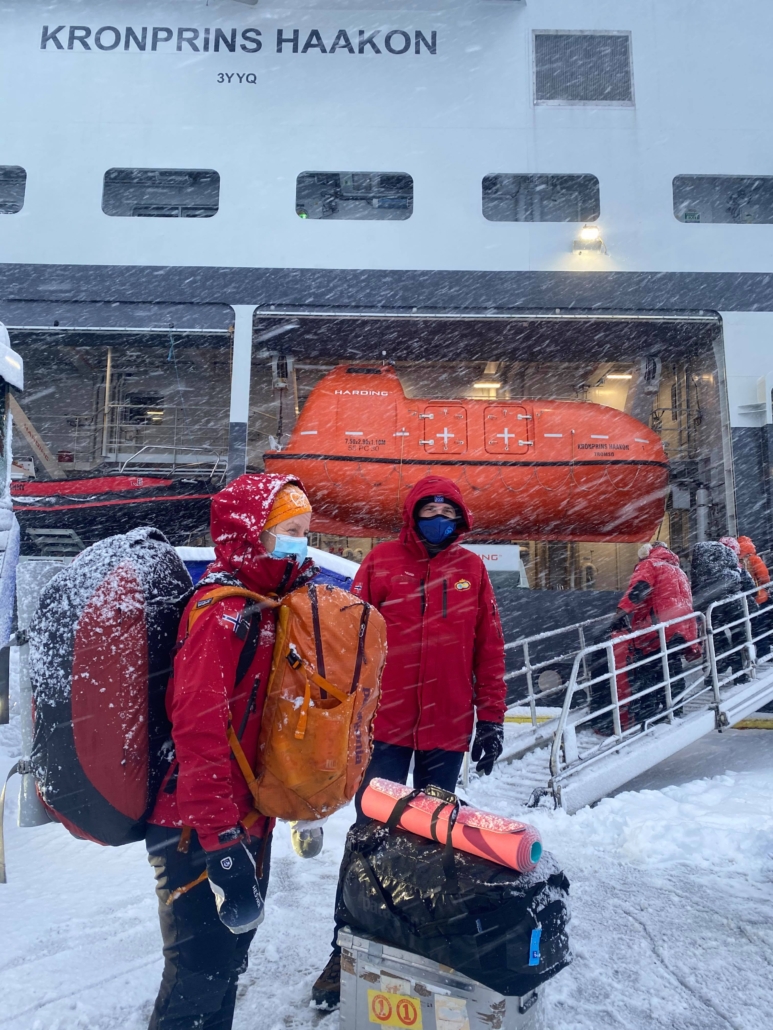 To cruise leaders ready to sail to the Barents Sea and do some research; Anette Wold and Sebastian Gerland, both from Norwegian Polar Institute. Photo: Elin Vinje Jenssen / Norsk Polarinstitutt

During the cruise, researchers will investigate the properties of sea ice, the sea ice growth, and the effects of these winter conditions for biology and chemistry in the Barents Sea.  In order to study the  ecosystem we will do a wide range of measurements including  measurements of the atmosphere with weather balloons, at the surface and underside of the ice, in the water column and at the seabed. Samples of water, ice and seabed sediments will also be collected. Measurements of the water column are going to be performed to take a closer look at heat transport and mixing of water masses. Heat transport is also important for how much sea ice can grow, or how fast it melts. We need to take many measurements of ice and snow thickness, such as ice temperature, salinity and how the ice and snow attenuate the light in and under the ice.

The biologists on board will study different organisms in the ice, the water and at the seabed. They will investigate the geographical distribution and in which water masses they occur, and how they adapt to the different climatic conditions along the investigated transect from south to north. Biogeochemists look at ocean acidification and its effects on organisms in the sea and ice, as well as trace elements (small particles of nutrients) and heavy metals. Not least, the occurrence of various environmental toxins and their effect on wildlife will be studied.

In addition to measurements in the water and on the ice, experiments will be carried out on board R/V Kronprins Haakon. On this cruise, a helicopter will be taken along, to fly longer measuring lines over the sea ice. With an electromagnetic instrument hanging under the helicopter, ice thickness is measured, and with a stereo camera setup, the high-resolution ice surface is going to be photographed. With this data, measurements made at ice stations can be extended to a larger region. 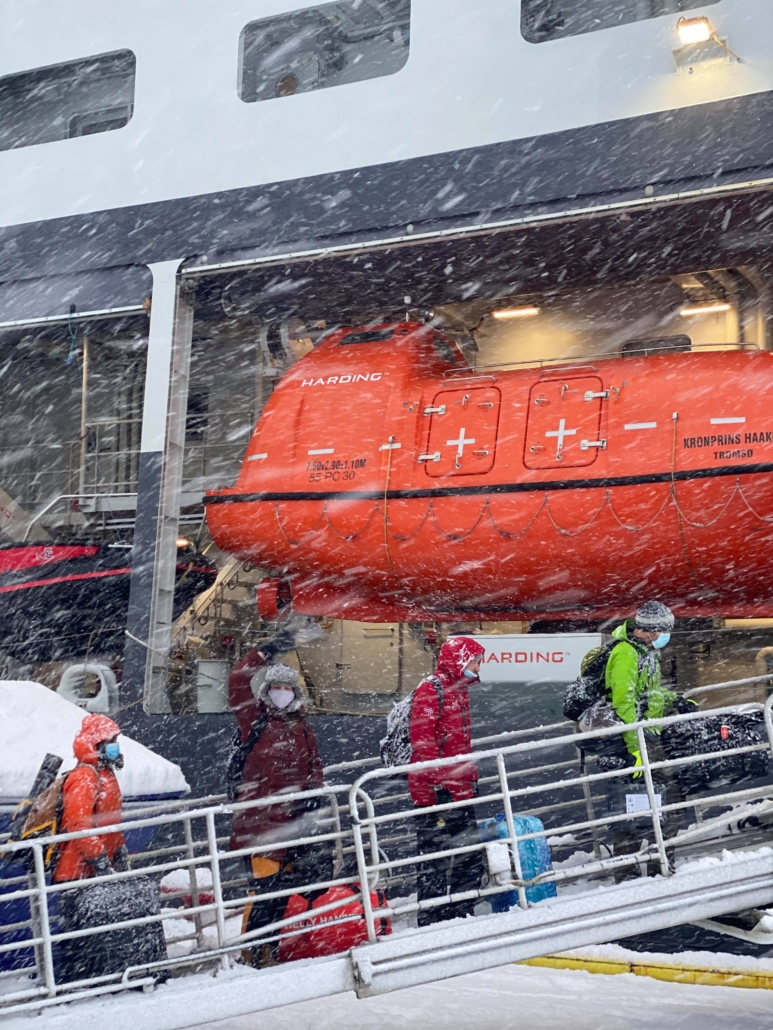 Research areas in the Barents Sea and the Arctic Ocean

Where will the research work take place specifically? The researchers work along a transect in the western Barents Sea, from the middle of the western Barents Sea at 76 degrees north, via  the shelf edge into the Arctic Basin to approx. 82 degrees north. We will repeat the same stations that were sampled on the two previous seasonal cruises, Q3 and Q4.. This allows us to compare the observations and put the result into perspective later. Where there is sea ice, the researchers will go out on the ice, take ice and water samples and observe the ice up close, also with the help of a drone. The helicopter work is carried out when there are suitable flight conditions for it. While most of the stations are located in the relatively shallow Barents Sea with water depths of a few hundred meters, the northern end of the transect at 82 degrees north is already in the Arctic Basin itself with a depth of about 3000 m.

The research group with an international background

The research group on the Q1 cruise consists of several groups: Physical processes, zooplankton, chemistry, microbes, and benthos (life at the seabed). In total, the research group consists of 35 women and men: scientists and technicians, as well as a helicopter pilot. The ship’s crew members are also important for a successful cruise, they make sure that the ship arrives at the stations , that the samples can be taken, and that everyone is safe and doing well on board R/V Kronprins Haakon.

How can such a voyage be carried out during the pandemic? The plan for the cruise was carefully thought out and planned according to the pandemic, and risk analyzes were conducted. The research group has been in isolation for 10 days before the cruise, in a hotel in single rooms, where everyone was served their food at the door. The group was corona tested, and meetings between cruise participants were held every day during the isolation period online via teams. The group is then driven to the ship on the day the cruise starts and will go directly on board the R/V Kronprins Haakon.

Participants in the research group are all linked to different institutes, universities or organizations in Norway, but they originally come from a total of 14 different countries, from Europe, Asia, North America, South America, and Australia.

On this cruise there will be participants who have a lot of experience from previous cruises. However, for some this will be their first cruise.

Either way, everyone is looking forward to partake in this upcoming cruise.

Notify
– Larger areas of ocean in the Arctic must be protected

Excitement onboard the RV Kronprins Haakon
Scroll to top