Student heads to the North Pole to study the South Pole

Well, not exactly – but that’s what it feels like for Indian Anirudha Mahagaonkar (29).

Well, not exactly – but that’s what it feels like for Indian Anirudha Mahagaonkar (29). 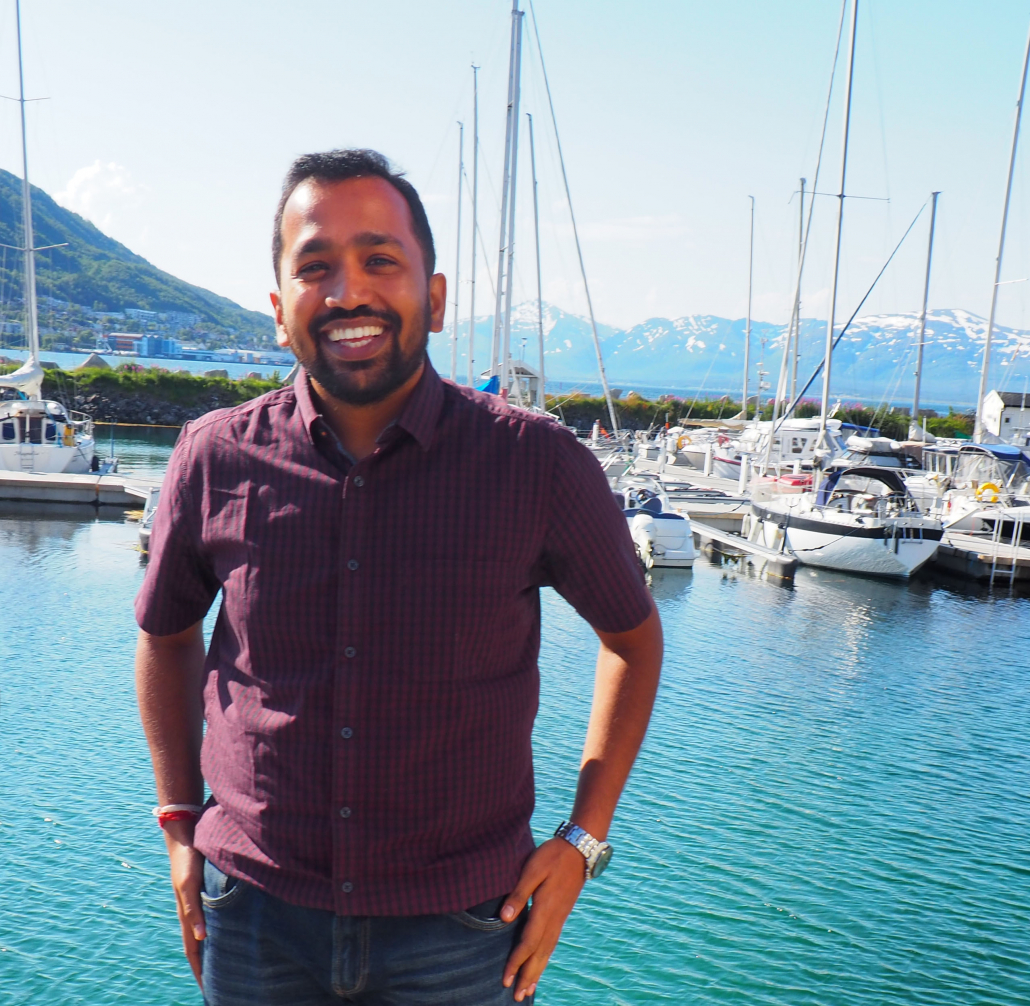 GETTING SETTLED IN THE ARCTIC Indian Anirudha Mahagaonkar is enjoying hisnew life as a doctoral student in Tromsø. And the weather is perfect. “It’s quite chillyoutside now! Terrific weather for working,” he says, squinting up at the cloudless sky. Photo: Elin Vinje Jenssen / Norwegian Polar Institute

In Tromsø, the thermometer reads 21.9 degrees Celsius this Friday morning in late July. The sun has already been warming the city for several days now. There is scarcely a breeze in the air, and as a Northerner, this writer finds the temperature to be quite sweltering. But Anirudha doesn’t notice the heat that is ‘ravaging’ the region.

“It’s quite chilly outside now! Terrific weather for working,” he says, squinting up at the cloudless sky.

“I like these kinds of temperatures. If we have weather like this at home in India, everyone agrees that it’s cold outside.” 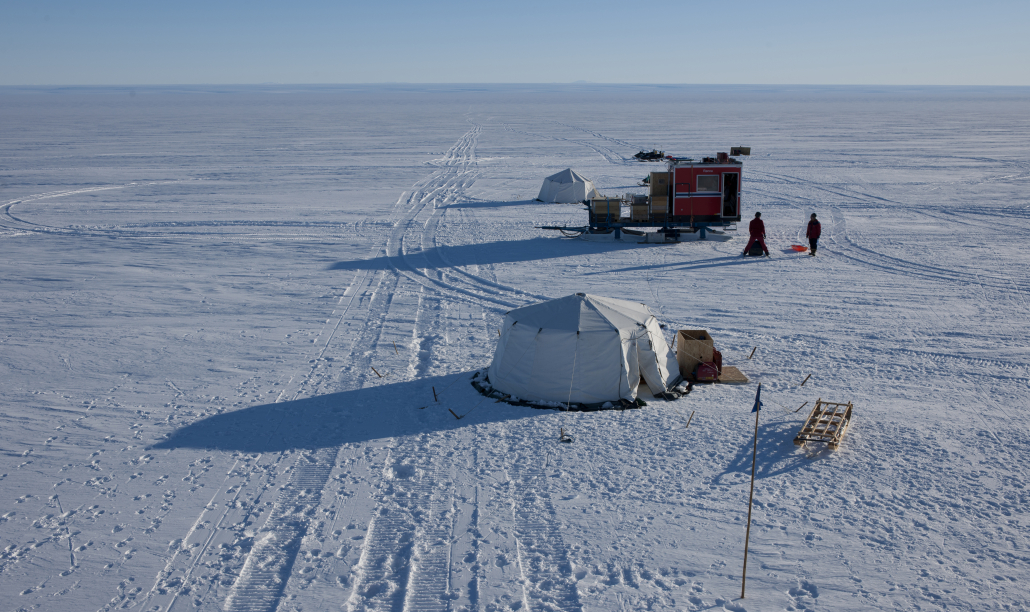 ICE SHEET Research camp on the ice in Dronning Maud Land in Antarctica. It is in this area of Antarctica that Anirudha Mahagaonkar will research the glacier. Photo: Elvar Ørn Kjartansson / Norwegian Polar Institute

We clearly come from opposite sides of the globe. But over the next three years, the young doctoral fellow will experience a great deal of cold weather. He will have a permanent address in Tromsø and an office at the Polar Institute at the Fram Centre. From here he will study the ice in Antarctica.

“I’ve come from the equator to the North Pole in order to study the South Pole,” he says with a laugh.

Together with Geir Moholdt, a glaciologist at the Polar Institute, Anirudha will examine details in the ice more closely, with a focus on the Antarctic ice sheet. Antarctica is home to the largest ice mass in the world, the maximum thickness of which can be up to approximately 4 kilometres.

In their research, the duo will use advanced radar and laser data from satellites to map how far inland the seawater stretches beneath the ice sheet – the so-called ‘hinge zone’ where the outflowing ice from the inland meets the sea and begins to float like ice shelves, recounts Moholdt, who is supervising Anirudha’s doctoral degree project. 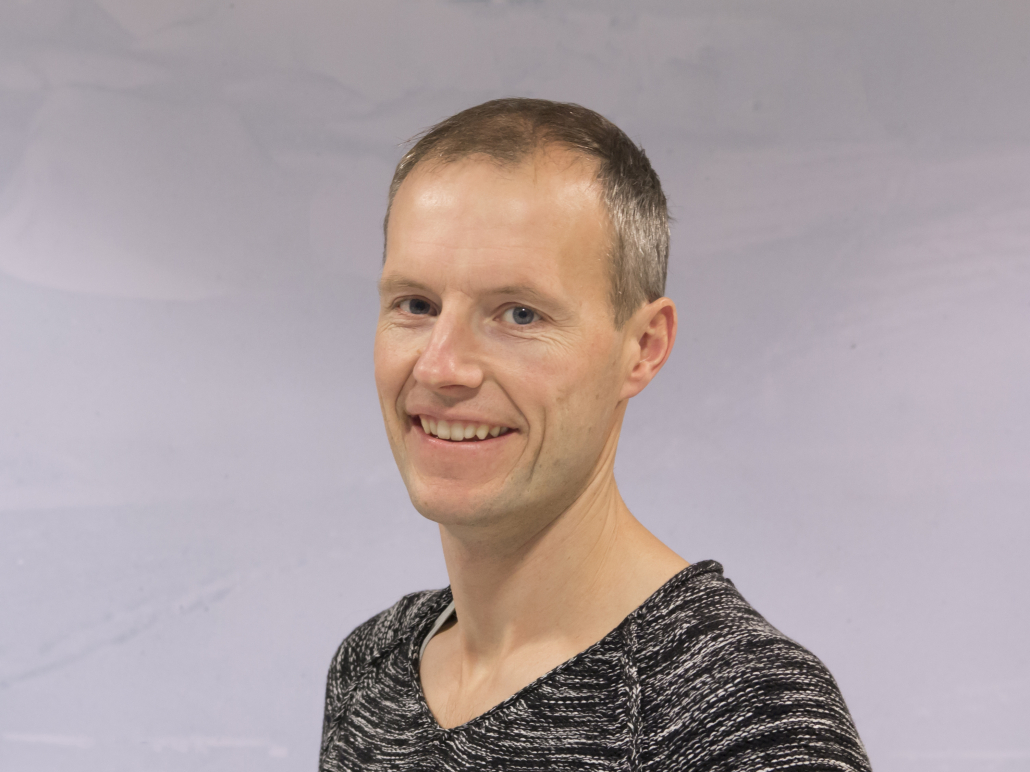 “This ‘real coastline’ is not visible on the surface, so instead you have to study the tides that cause the floating ice to move up and down with the ebb and flow of the seawater. This is made possible by super-sensitive radar and laser satellites that can measure elevation changes of a few cm at different stages of the tidal cycle.”

If the elevation changes with the tide, the ice is floating. If not, it is resting on solid ground.

“The enormous difference in friction between land and water means that the grounding zone has a decisive impact on the stability of the ice sheet. If the seawater reaches further inland, then the ice sheet flows more easily into the ocean – and vice versa, if the ice thickens and encounters more ‘rocks in the sea’.” 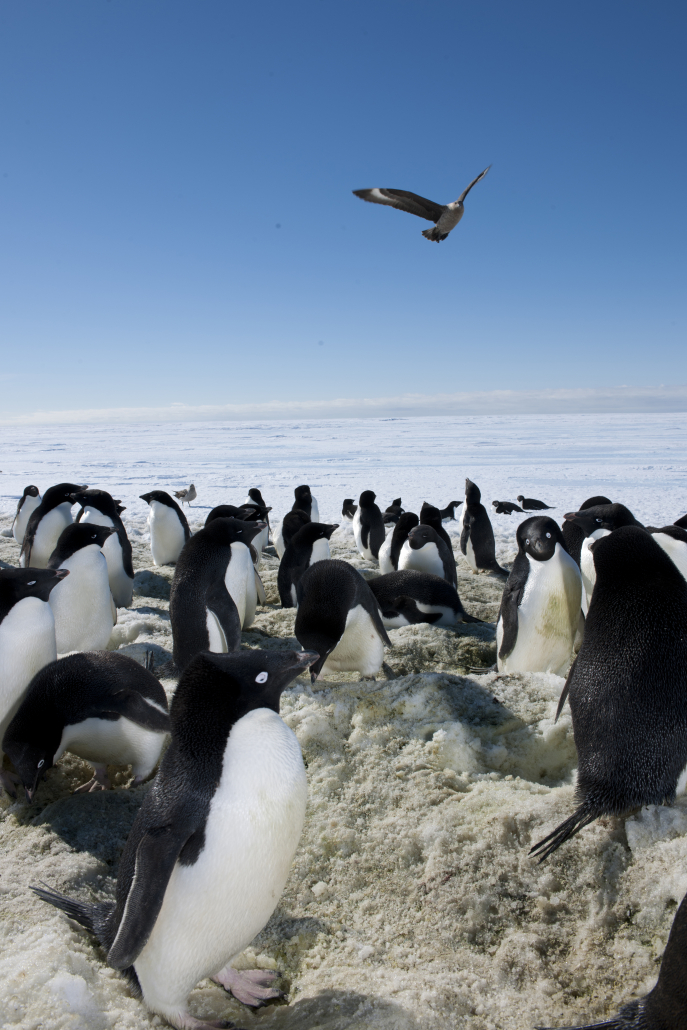 A CHANGING CONTINENT In scarcely a century, global sea levels have risen by as much as 19 centimetres. In recent times, this is primarily because the planet’s glaciers are losing more and more ice as a result of global warming. This photo is from close to the coast of Dronning Maud Land and shows a colony of Adélie penguin being attacked by a south polar skua in search of food. Photo: Elvar Ørn Kjartansson / Norwegian Polar Institute

The sea level is rising

There is relatively little knowledge of changes in the ice of East Antarctica, and it is here in the Norwegian dependent territory of Dronning Maud Land that Anirudha will focus his doctoral degree project.

Anirudha and Moholdt’s research is highly relevant to the current climate crisis. In scarcely a century, global sea levels have risen by as much as 19 centimetres. In recent times, this is primarily because the planet’s glaciers are losing more and more ice as a result of global warming, a problem also mentioned by the UN Intergovernmental Panel on Climate Change when it released its climate report on oceans and ice last year. 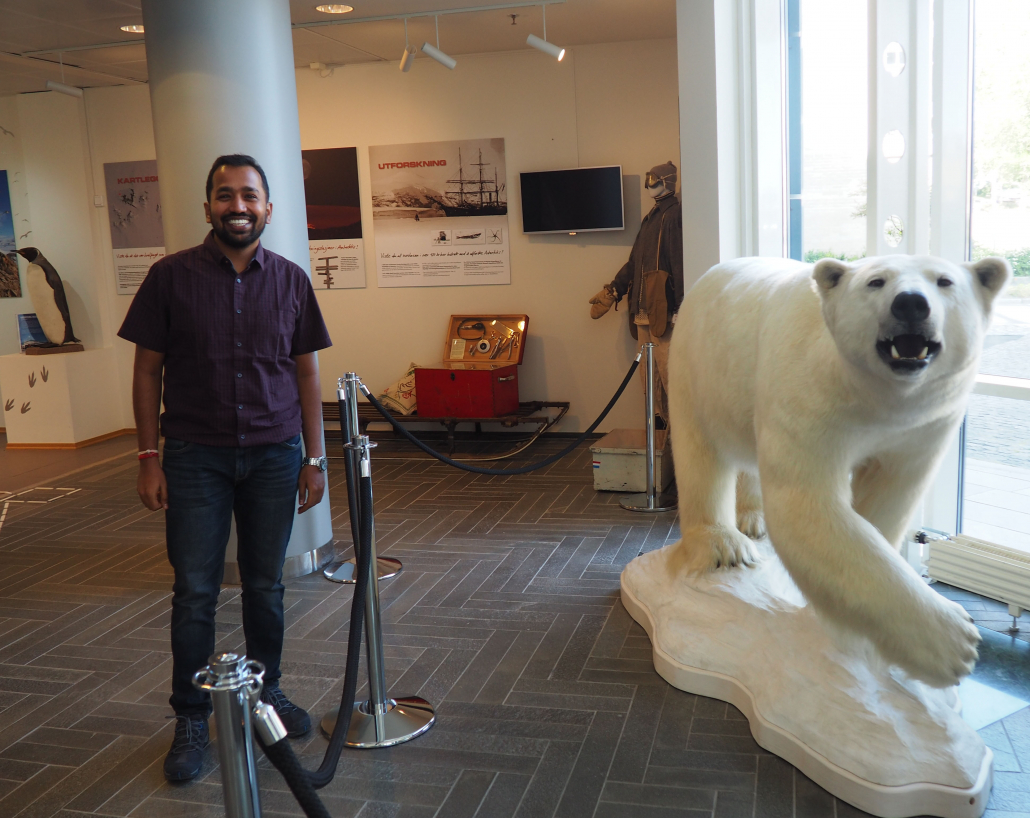 MEMORABLE EXPERIENCES Anirudha is headed for an exciting time. After travelling half the globe to get to Tromsø, he is planning a trip to Svalbard this winter. It remains to be seen whether he will be lucky enough to see a polar bear, but for now he is pleased to see one in the foyer of the Fram Centre. Photo: Elin Vinje Jenssen / Norwegian Polar Institute

Polar co-operation between India and Norway

As Anirudha heads for the poles, he is following in the footsteps of other Indian researchers. The polar research co-operation between India and Norway has already been going on for several years, including through an exchange programme that welcomes Indian fellows from India’s Centre for Polar and Ocean Research (NCPOR), with which Anirudha is also affiliated. India is home to the only ice core laboratory in South Asia. And one of India’s two research stations in Antarctica – Maitri – is located in Dronning Maud Land. It is about 350 km from Maitri to the Norwegian Troll research station, and approximately an hour’s flight between the two neighbours in this vast, icy wilderness. The geographical proximity between the countries’ stations in the south has made co-operation convenient. 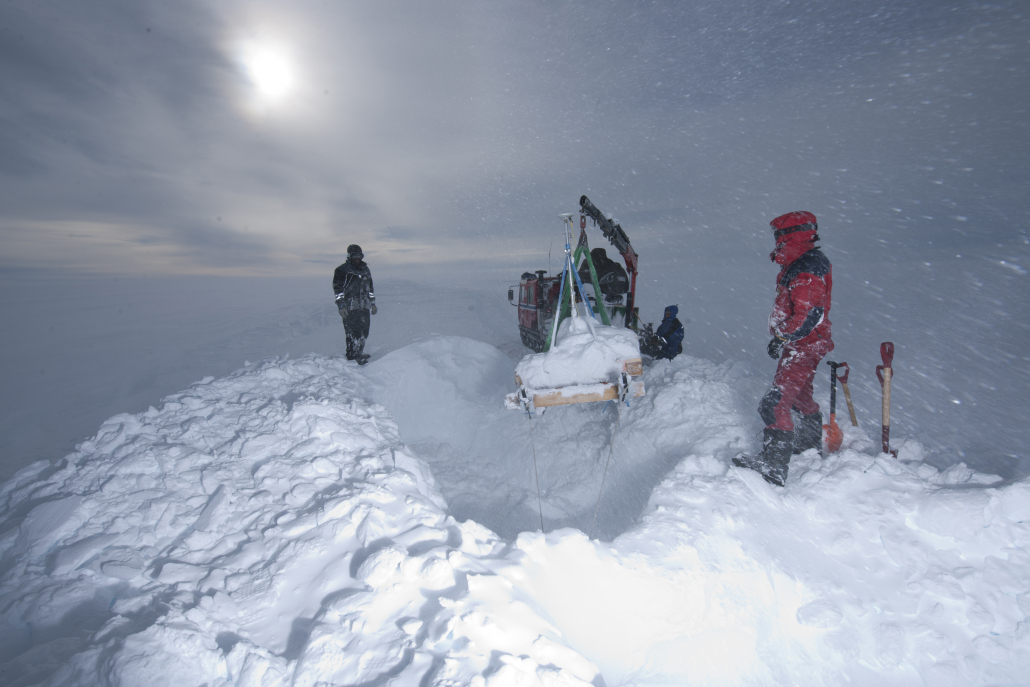 EXPOSED TO THE ELEMENTS Field work on the Antarctic ice sheet is conducted during the Antarctic summer, which lasts from November/December to February – but this is no guarantee of sunny, stable weather. This photo is from research conducted on the Fimbul Ice Shelf in Dronning Maud Land in Antarctica. Here, the field team cleans up after a storm that has ravaged the tent camp. Photo: Elvar Ørn Kjartansson / Norwegian Polar Institute

The dream of Antarctica

Anirudha is looking forward to really getting started with his studies. Since arriving in Norway in June (several months late due to the coronavirus pandemic), much of his time has been spent getting acquainted with the work, getting to know his colleagues and settling into his new residence. His wife, who is also a researcher, has remained back home in India. The plan is that she will eventually come to Tromsø.

For now, Anirudha is looking forward to the polar night, colder days and winter. He plans to learn to ski – hopefully under a sky illuminated by the northern lights.

“I can’t wait to experience the nature around Tromsø, hike in the mountains, ski and finally see the northern lights!”

A study trip to Svalbard is also planned for this winter. And much further in the future, the goal is to reach an even colder place on the planet – Antarctica. He has never been there before.

But his dream might not be that unrealistic – especially in light of the nature he intends to study, and his affinity for the cold.

“I hope to travel to Antarctica for fieldwork. That’s definitely a dream, too!”

But for now, he can start with the Arctic winter that will soon arrive in Tromsø.

Two months in the drift ice