Atlantic Water flows into the Arctic in three branches near Svalbard.
One branch – warm, fast and often found all the way up to the surface – flows around the north-west corner of Svalbard and then continues along the upper part of the continental slope north of Svalbard.
A second branch crosses the central part of the Yermak Plateau and joins the first branch further east. This second branch appears to be highly seasonal, and carries the largest heat and volume in autumn and winter.
A third, smaller branch, follows the outer perimeter of the Yermak Plateau and then turns eastward, flowing as a wide, slow and semi-deep current along the outer, deep part of the continental slope.

Together, this large current system carries an enormous amount of heat and salt into the region – of similar magnitude as the Barents Sea Branch but with higher temperature when it enters the Arctic Ocean proper. It also brings a continuous supply of nutrients for primary production (phytoplankton growth) and transports living organisms of lower-latitude Atlantic origin into the area.

The primary objective of this project is to understand how heat from the Atlantic Water influences the Arctic Ocean sea ice cover, but also to provide data for understanding the playing field for some of the key actors in the ecosystem, and components of the carbon system.
A-TWAIN (Long-term variability and trends in the Atlantic Water inflow region) was established to gain understanding on how the inflowing current system is distributed at different depths along the continental slope, how it responds to local, short lived atmospheric changes, and how it varies on seasonal and inter-annual timescales. 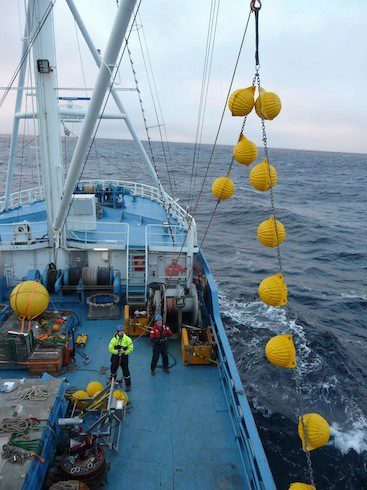 The A-TWAIN project has been funded by the Fram Centre “Arctic Ocean” flagship since 2011, along with in kind funding from the partner institutions (Norwegian Polar Institute, Institute of Marien Research and UiT – The Arctic University of Norway). Since 2018 the project has also received funding from the Research Council of Norway through the SIOS-InfraNor project. International A-TWAIN collaborators include IOPAS (Poland), SAMS (UK), Sorbonne Université (FR), and WHOI (USA).

The first moorings were deployed in September 2012, during a cruise where a large survey of hydrography was also undertaken. In 2013 the moorings were recovered, and a new spatial mapping of water masses was done. Moorings were deployed again from 2013 to 2015, and redeployed again from 2015 to 2017 and from 2017 to 2019. We plan to continue with at least bi-annual mooring service and hydrography cruises for the foreseeable future. 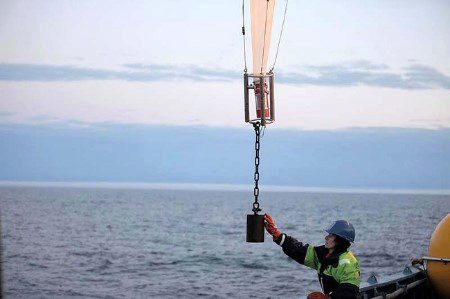