Jan Mayen is an island situated at 71°N 8°30'V, about 1000 km west of mainland Norway and 550 km northeast of Island . The island is 53 km long and covers 377 km2. As recently as 1985 there was an eruption from the volcano Beerenberg (2277 m) on the island - the world´s northernmost volcano above sea level, and Norway's only active volcano. There is a constant threat of new eruptions and earthquakes.

Jan Mayen is an island situated at 71°N 8°30'V, about 1000 km west of mainland Norway and 550 km northeast of Island . The island is 53 km long and covers 377 km2. As recently as 1985 there was an eruption from the volcano Beerenberg (2277 m) on the island - the world´s northernmost volcano above sea level, and Norway's only active volcano. There is a constant threat of new eruptions and earthquakes.

Today’s activity at Jan Mayen is linked to meteorological observations as well as the operation and maintenance of installations related to research and navigation. In the sea areas around the island, considerable fishing takes place, especially after soldering and shrimps.

The Jan Mayen Nature Reserve was declared by Royal Decree of 19.11.2010 to preserve a near pristine Arctic island and adjacent sea areas, including the seabed, by ensuring the protection of the island’s habitat (seabirds), the adjacent marine area (for research) and the volcanic system.

Jan Mayen, together with Bouvetøya in Antarctica, was added as a Norwegian candidate for UNESCO World Heritage List in 2007.

Jan Mayen’s climate is Arctic-maritime, with relatively mild winters and cold summers. Clear days are rare, foggy days are more the rule. The waters surrounding the island are normally icy from February until April, but this varies from year to year.

The Arctic fox was earlier the only numerous mammal on Jan Mayen but excessive hunting nearly led to its extinction. Polar bears are not normally found on Jan Mayen. Hooded seals and harp seals have important breeding areas north-west of Jan Mayen, and some years even near the shores of the island, due to ice conditions. 27 species of birds use the island as their regular nesting site.

The tidal zone around Jan Mayen has a limited flora and fauna. The marine fauna is similar to what can be found by the south-eastern coast of Greenland. The two most commercially valuable marine resources around the island are shrimp and Iceland scallop. 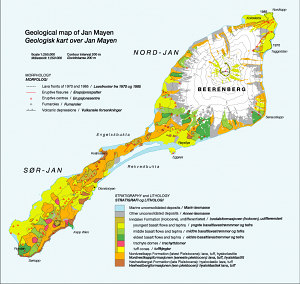 The Jan Mayen shelf was formed during the opening of the Atlantic Ocean about 40 million years ago, in the Eocene epoch, and is a remnant of continental crust. However, the oldest rocks which extend above sea level are only around half a million years old. Jan Mayen as an island has, thus, hardly experienced more than the last three Quaternary ice ages.

The island rises from a subsea volcanic mountain chain called the Jan Mayen Ridge, which forms the boundary of the 1500-metre-deep Iceland Plateau in the north-east. North of Jan Mayen, the sea floor slopes fairly steeply down to a depth of more than 2000 metres in the Jan Mayen Rift Zone.

This rift zone is an active transform fault zone, in which the mid-ocean ridge between Europe and America is offset by approximately 200 km. This displacement is still taking place at an average rate of a couple of centimetres a year.

A small segment of the spreading zone probably underlies the north-eastern tip of Jan Mayen. The volcanism and earthquake activity on and around the island are due to this location. 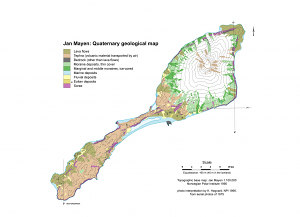 The landscape on Jan Mayen is influenced by the volcanic origin of the island. The northernmost active volcano in the world which rises above sea level is located on the northern part of the island. Beerenberg is a majestic volcano, towering to a height of 2277 metres, and having regular sides which slope at about 30° around the Central Crater and continue downwards to the main massif at around 15°. This break of slope is a result of a young stratovolcano, built of an alternation of lava and tephra, having formed on an older shield volcano, mainly composed of lava. Numerous parasite craters built of tuff, slag and tephra pockmark the lower slopes.

Beerenberg has more than twenty glaciers, which cover some 30 % of the area of the island. Some of their snouts reach right down to sea level.

The bedrock on the island consists of basalt lava flows alternating with pyroclastic rocks. The latter are rocks of volcanic origin flung out during eruptions and more or less consolidated in the air. The youngest volcanic eruptions in 1970 and 1985 took place on the lower slopes on the north-east side of Beerenberg. The Central Crater and Egg Island, a crater remnant on the south side of the mountain, have permanent fumarole activity (emission of hot steam). There is thought to be an average of one volcanic eruption on Jan Mayen every 100-130 years.

The volcanic eruption in 1970

The largest known volcanic eruption occurred in September-October 1970, when a plume of smoke up to 11 km high was observed from a passing passenger plane.

The eruption took place from several craters along a 5 km-long zone of fissures close to the north-east tip of Jan Mayen. Lava production lasted more than 4 weeks, and about 0.5 km3 of lava was produced. Over 4 km2 of new land was formed, spread out on the former seabed for up to 300 metres. However, more than half of the new land surface was completely eroded by the sea in the matter of a few years.

A more detailed account of the geology of Jan Mayen, including all the known volcanic eruptions, can be found in the report: Natur- og kulturmiljøet på Jan Mayen: med en vurdering av verneverdier, kunnskapsbehov og forvaltning.

Though Jan Mayen has most likely been known of since the Viking Age, evidence of human activity on the island dates back to the 15th century. The Dutch established land stations for whaling, which were gradually abandoned after 1634. Research activities date back to 1882-83 and their remains are still to be found in Maria Muschbukta, protected according to preservation regulations. At the beginning of the 1900s, Norwegians started to hunt for Arctic fox on the island. Of the original 13 hunting cabins, five still remain. In 1921 Hagbart Ekerold established the first meteorological station on Jan Mayen, and the following year, the Norwegian Meteorological Institute annexed a part of the island. In 1926 the Institute annexed the whole island, but it was not until 27 February 1930 that Jan Mayen was incorporated in the Kingdom of Norway by law. 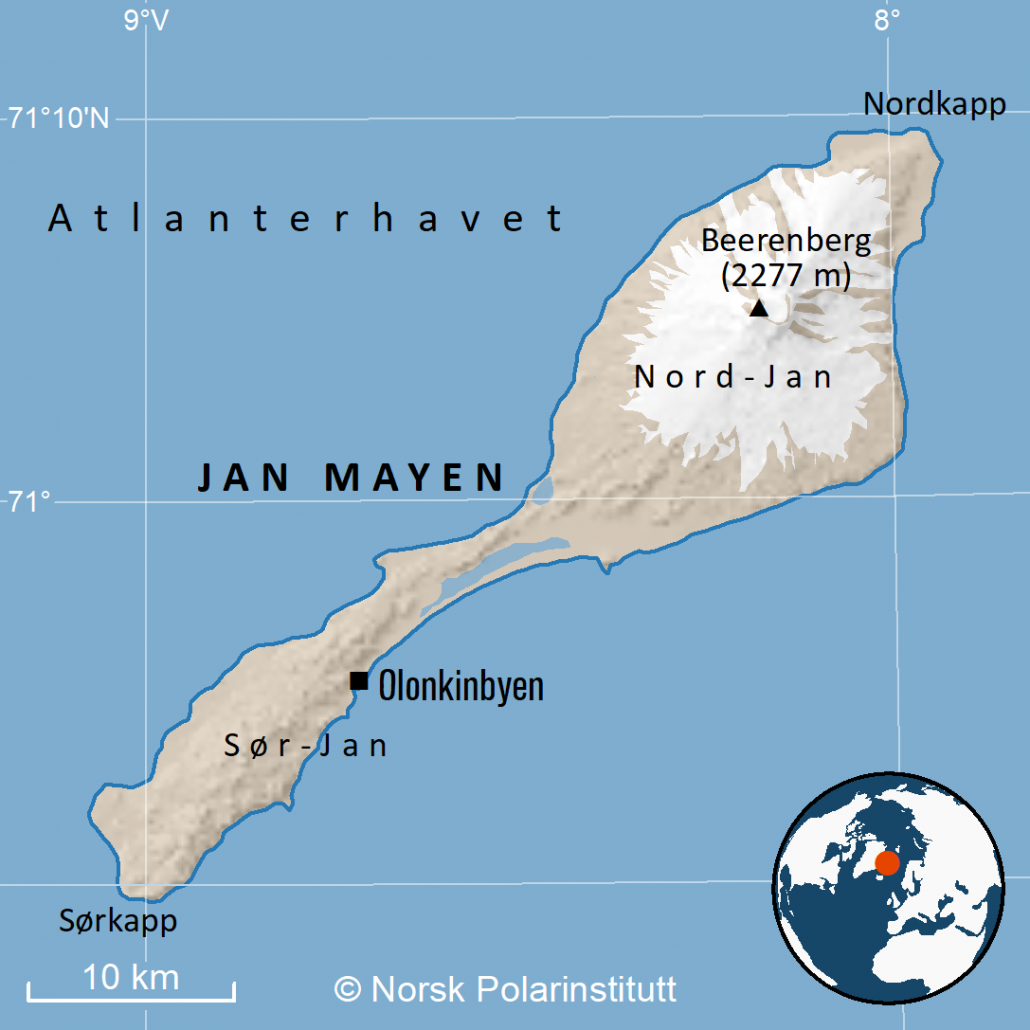