The geology of Antarctica is very varied; fossiliferous sedimentary rocks, lava and deep magmatic rocks, a wide range of metamorphic rocks, as well as active volcanoes and glacial deposits.

The geology of Antarctica is very varied; fossiliferous sedimentary rocks, lava and deep magmatic rocks, a wide range of metamorphic rocks, as well as active volcanoes and glacial deposits.

Most of Antarctica is covered by ice, but where mountains breach the ice, exposures are completely free of vegetation. This gives geologists a unique opportunity to study how the rocks were formed in relation to the various geological processes that have taken place in the Earth’s crust. Geophysical techniques have recently begun to be employed to acquire information about the bedrock beneath the ice.

The geology of Jan  Mayen

The geology of Bouvetøya

The geology  of Svalbard

Dronning Maud Land comprises nearly 1/6 of the Antarctic continent. A mountain chain runs parallel to the coast, about 100-200 km from the ice edge. The geology of Dronning Maud Land has been mapped and described by Norwegian, German, South African, Japanese, Indian and Russian geologists in the last few decades. The mountains in Dronning Maud Land reveal a deeply eroded section through an approximately 500-600 million-year-old mountain range.

At that time, Dronning Maud Land bordered up to Africa, Madagascar, Sri Lanka and India, and was part of the vast Gondwana? supercontinent. This primeval continent comprised Antarctica, Africa, India, Australia and South America. Gondwana began to break up 200 million years ago and some parts, like Africa and India, began drifting northwards towards their present location.

The bedrock of Dronning Maud Land is dominated by Precambrium? rocks that originated some 1200-1000 million years ago, before the formation of Gondwana. These rocks, which are of magmatic? or sedimentary origin, occur as gneiss (ortho- and paragneiss), migmatite, calc-silicate rocks and amphibolite. The bedrock experienced a new episode of deformation, high-temperature transformation (metamorphism) and partial melting during the Pan-African orogeny?. Detailed analyses of mineral assemblages and compositions show that the metamorphism took place at temperatures of 700-850°C and pressures corresponding to a crustal depth of 25-30 km.

Large volumes of magma intruded the gneisses during this period. The magma solidified to form new rocks like granite, charnockite and syenite. These intrusions? are massive and sometimes very coarse grained and the rocks often form spectacular, jagged peaks and alpine ranges that are so characteristic for the landscape in central parts of Dronning Maud Land. Another characteristic feature of the granitoid rocks in Dronning Maud Land is the dark-brown weathering colour, which often makes them recognisable at a long distance.

Towards the end of the pan-African orogeny, the thickened crust became unstable. Extension of the crust in Dronning Maud Land led to rocks from a deeper level in the crust being carried to higher levels. The extension (stretching) continually occurred from deeper crustal levels, where ductile (plastic) deformation of the rock mass takes place, towards higher crustal levels, where the crust deforms in a brittle fashion. Structures formed at the different crustal levels can be observed as folds, shear zones and faults.

Brown rocks characterise large parts of Dronning Maud Land. You can often see light-coloured zones and stripes on the cliffs. These stripes are caused by fluids which have transformed, bleached, the dark rocks.

Crystalline rocks originating at great crustal depths are basically compact and impermeable. Fluids can, however, invade the rock along fractures which occur as veins in the centre of the light stripes. The marked colour change arose when the fluids flooded along the microfractures in the country rock, transforming the original minerals into new, hydrous minerals. Analyses of fluid inclusions preserved in the minerals show that they consisted of water, carbon dioxide and small amounts of nitrogen. Fluid infiltration in the bedrock of Dronning Maud Land is far-reaching and shows regional distribution. Because fluids can react with minerals in rocks, they alter the properties of the rocks and are thus important for processes in the Earth’s crust. Their significance in geological processes has been an important research topic in recent years.

Owing to the good exposure where the mountains breach the Antarctic ice cap, Dronning Maud Land is a unique laboratory for studying just such processes. 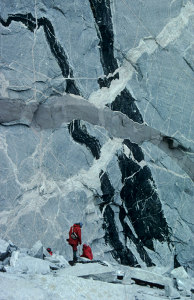 Jutulhogget, Gjelsvikfjella. Grey gneiss is intruded by three generations of dykes. The white dyke consists of felsic pegmatite, the black dykes of amphibolite and the brown one, the youngest, is syenite.  Photo: Synnøve Elvevold / Norwegian Polar Institute

The bedrock at Jutulsessen mainly consists of granitic gneiss and migmatite. Syenite and gabbro also occur in the northeastern parts of Jutulsessen. The area is characterised by a large number of felsic? dykes, which locally make up 20-30 % of the rock volume. This can be seen, for example, in the western cliff of Sætet. Structurally, the gneisses vary from being massive and homogeneous to displaying distinct layering.

The oldest rocks, granitic gneiss and migmatite, date from about 1100 million years ago. Later, during the pan-African mountain building episode, some 500 million years ago, the gneisses underwent amphibolite and granulite facies metamorphism. Along the east side of Jutulsessen, and elsewhere, structures are seen which show that the rocks have undergone partial melting.

Stabben is an impressive mountain with 300 m high, steep cliffs. It consists of massive, coarse-grained syenite which intruded (forced its way into) the country rocks about 500 million years ago. Since syenite is more resistant to erosion than the gabbro of surrounding mountains, Stabben stands up as a crag. The tall, steep cliffs of Jutulhogget consist of homogeneous, resistant (hard) gneisses. Where the rocks are more layered and richer in micas, the mountains are lower and have more gentle slopes, like the north side of Grjotlia.

Jutulsessen is a nunatak between two ice falls to the east and southwest. Small cirque glaciers at Jutulsessen have eroded and formed Sætet and Grjotlia, and left behind a great deal of morainic debris which consists of clay and sand particles and rocks derived from the surrounding mountains. These areas with superficial deposits are characterised by permafrost, and patterned ground displaying 5-10 m large, up to 1 m high, circles and polygons with large stones accumulated in their centres, is developed in a number of places. The weathering of the ice-free mountainsides takes place through frost shattering and strong winds which carry sand and ice particles. These processes have, for instance, formed deep holes and depressions along some mountainsides.