It is not the sea ice that makes the marginal ice zone (MIZ) valuable and vulnerable but rather the ecosystems that are directly or indirectly connected to it. The MIZ is crucially important for a number of species and biological processes. Ecosystems in the ice, the ocean water and the seafloor are linked. Phytoplankton blooms in the MIZ extend a considerable distance south of the ice edge, making this an important feeding area as well.

It is not the sea ice that makes the marginal ice zone (MIZ) valuable and vulnerable but rather the ecosystems that are directly or indirectly connected to it. The MIZ is crucially important for a number of species and biological processes. Ecosystems in the ice, the ocean water and the seafloor are linked. Phytoplankton blooms in the MIZ extend a considerable distance south of the ice edge, making this an important feeding area as well.

The MIZ is defined as the transitional zone between open sea and dense drift ice. It spans from where 15% of the sea surface is covered by ice to 80% ice concentration. The southern border of this zone is known as the ice edge. It is usually not a sharply demarcated edge but a belt comprising ice floes with patches of open water in between them. Wind blowing from the south or east pushes the ice together to form a fairly defined edge, but areas of open water form when the wind turns.

The borders of the MIZ are expressed as ice frequency

Daily measurements of ice concentration and calculations of ice extent are the basis for mapping the boundaries of the MIZ, which is expressed in terms of how often ice coverage of the sea surface exceeds 15% in a given period in the area in question. The average extent of 15% (or greater) ice frequency in April has been used as the maximum because, historically, sea ice reaches its greatest breadth in this month. The minimum is usually in September. Interannual variation and climate change mean that the months of minimum/maximum ice extent may not be the same in the future. The minimum and maximum extent of 15%+ ice frequency are presented as monthly maps for a 30-year period and is updated annually. Information from a 30-year time series has the statistical power to predict ice extent in the short term.

Along with other government institutions, the Norwegian Polar Institute participates in an advisory group – the “Faglig forum ” – that informs the Norwegian government’s management plan for the Barents Sea and the waters off the Lofoten islands.

The forum has characterized the MIZ as an area of special value and vulnerability. In connection with the revision of the management plan, politicians must agree on where to draw the boundaries of the MIZ.

Scientific knowledge about the physical, chemical and biological processes in the MIZ underpin the Norwegian Polar Institute’s recommendation that the southern border of the MIZ should be set at the southernmost edge of the maximum extent, that is, where ice frequency is 0.5%.

Data for NPIs recommendation of the border of the MIZ
Documentation and  metadata
Report: Grunnlag for revisjon av forvaltingsplanen for Barentshavet

The sea ice frequency in the Norwegian Arctic, monthly for 1990-2019

Download separate maps by selecting a map in the gallery below, or:

Life in the ice

The MIZ comprises first-year and multi-year ice. Various types of ice are habitats for an array of Arctic species. When seawater freezes, most of the salt is expelled from it and the ice floats on the sea surface. The channels and small spaces formed by salt rejection and ice melting are occupied by tiny animals and algae. Larger cavities host crustaceans and polar cod. Ice algae can also grow on the underside of the ice, where it is an important food for animals that live in the ice and for zooplankton that rise up from the ocean depths to reproduce in the spring. Some species of ice algae also occur in the meltwater ponds that form on the surface of the ice in the summer. 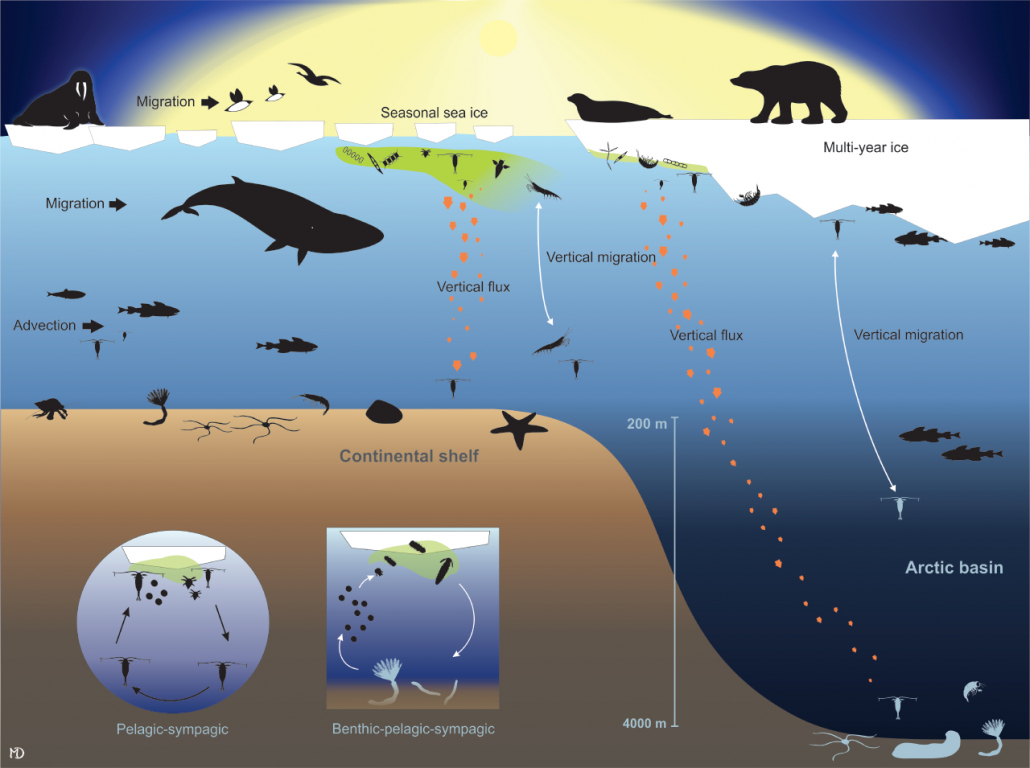 Production in the MIZ

Primary production – the solar-powered process by which inorganic matter, including carbon dioxide, is converted into biomass that is the basis of the food chain – in the MIZ starts in March–April with the appearance of ice algae, and in April–May the bloom of phytoplankton kicks off. The bloom depends on nutrients – nitrate, phosphate, silicate – and layered water masses. The layer of meltwater on top keeps phytoplankton in the upper part of the water column, where it gets the sunlight it needs. With enough light the bloom can stretch far under the ice and also far south of the MIZ. The algae in and on the underside of the ice and the phytoplankton in the water are food for small ice-associated animals and zooplankton.

An important feeding ground and habitat

The MIZ serves as a feeding ground, nursery and overwintering area for fish, seabirds and marine mammals. Polar cod and capelin are the pelagic fish species most tightly linked to the zone. In addition, cod and a variety of Arctic fish species occur in the water column. The MIZ is important for many species of seabirds, several of which can be found there around the year. Brünnich’s guillemot and little auk can occur in large concentrations, especially in the spring and summer. Black guillemot, black-legged kittiwake, northern fulmar and ivory gull are also common. Ringed, harp and hooded seals use the MIZ as a breeding, moulting and resting place. Walruses haul-out on the ice after diving for molluscs on the seafloor. Polar bears hunt seals in the MIZ. Bowhead whale, beluga whale and narwhal are adapted to living where ice is present year-round, but the MIZ is also an important feeding area for other whale species in the summer.

Connecting the MIZ and the seafloor

The biological production that is not consumed at or near the surface eventually sinks to the seafloor and becomes food for the fauna that live there. These benthic animals often receive just this one annual pulse of food. While the MIZ drifts around on the sea surface, benthic creatures mostly stay put and are important prey for bottom-dwelling fish such as Greenland halibut, haddock and cod, as well as for diving birds like the common eider and for walrus and other marine mammals. As organic material decomposes at the bottom of the sea, it breaks down into the building blocks of next year’s primary production. So goes the annual carbon cycle. On a shallow continental shelf such as the Barents Sea, the links connecting life in the sea ice, in the water column and on the seafloor are particularly pronounced.

The timing of sea ice formation and melting, the amount and characteristics of the ice and the distance to land influence production and the faunal composition of the MIZ. By letting through more sunlight, the thinner, younger ice of recent years has boosted primary production. But diminished sea ice negatively impacts species that rely on ice as a habitat during all or parts of their life cycle. Changing ice and water temperature conditions will cause shifts in species ranges, altering competition between species and possibly ushering in diseases and parasites that Arctic-adapted organisms are ill-equipped to fight off. Ecotoxins and plastic can be incorporated in sea ice and then released when it melts, exposing ice-associated organisms to harmful substances. The top predators in the MIZ vary in their ability to break down ecotoxins. Fish move northward and eastward in tandem with extensions in the range of commercial fisheries. The influence of ship traffic and the petroleum industry is assumed to be small for the time being, but an oil spill near the MIZ could have grave consequences, depending on what is spilled, its quantity and the season.