The geology of Svalbard

For over a hundred years Svalbard has fascinated people with an interest in the earth’s early history. Many of those who have visited Svalbard have been captured by the archipelago’s vast and cold wilderness with beautiful mountain formations and rich geological diversity.

For over a hundred years Svalbard has fascinated people with an interest in the earth’s early history. Many of those who have visited Svalbard have been captured by the archipelago’s vast and cold wilderness with beautiful mountain formations and rich geological diversity.

The experience you get from entering Hornsund with peaks of lime stone, the nunataks of eastern Spitsbergen or the unreal red hues of Woodfjorden are wildly different.

A comparable diversity is not found anywhere else in northern Europe and no other places are so many geological periods conserved in rock. In addition to this an unusual amount of rock is exposed, with little soil or vegetation cover, and can therefore be studied uninterrupted over long sections.

During most of its geological history, Svalbard was submerged, and almost continuously deposited sand, gravel, mud, lime, etc., were progressively altered into bedrock. There is little soil in Svalbard and no forrests or agricultural areas which would hide the rock formations. The naked landscape permits clear insight into its geological structure. Although most of the land area is covered by glaciers, Svalbard is one of the few places in the world which provide excellent access to study sections of representing most of earth’s history.

Svalbard is a natural geological archive and a laboratory where the geological processes of the past and present are being demonstrated.

The geology of Jan  Mayen

The geology of Bouvetøya

The geology  of Antarctica 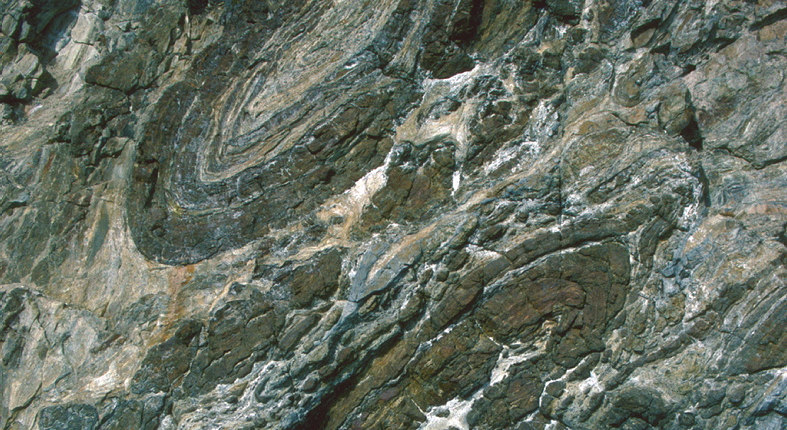 The bedrock is the oldest mountain, and has gone through many changes. Photo: Winfried Dallmann, Norwegian Polar Institute

The basement complex represents the oldest rocks. These are igneous or metamorphic rocks which after erosion were covered by flat-lying sedimentary beds. The strongest altered rocks occur in northwestern Spitsbergen and in the north of Nordaustlandet. The basement complex has undergone several periods of mountain building, with folding and metamorphism. Traces of the oldest events are almost wiped out by the younger ones. The last main mountain building episode was the Caledonian Orogeny which occurred during the Early Palaeozoic, about 410-440 million years ago. After its cessation, when the mountains had been uplifted, water and weather started to erode the newborn mountain chain.

The mountain Templet in the end of Isfjorden consists of flat lying sediments from the Permian period. Photo: Winfried Dallmann, Norwegian Polar Institute

The denudated mountains ended up as huge masses of sand, gravel and mud, which were deposited on river plains and in the sea during the Devonian period, ca. 360-410 million years ago. Later, new depositional episodes formed limestone successions during the Carboniferous and Permian, and sandstone-shale successions during the Mesozoic and Tertiary until about 40 million years ago. During initial stages of the ocean-floor spreading which led to the formation of the North Atlantic and Arctic oceans in the early part of the Tertiary (ca. 60-40 million years ago), the western part of Spitsbergen was folded again to form a new mountain ridge. East of this ridge, from the Isfjorden area to the south, a trough-shaped structure – the Central Tertiary Basin – was formed with the youngest beds in the core and the oldest on the flanks. 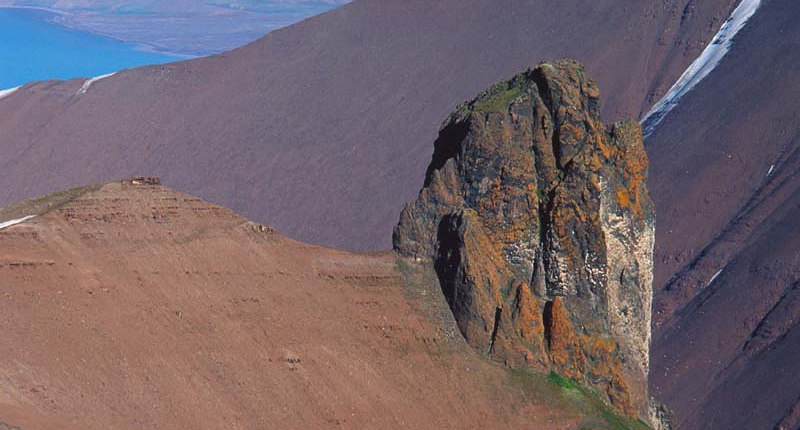 The youngest deposits are those of Quaternary age which ranges to the present. These are mostly unconsolidated deposits formed during and after the last ice age which ended about 10,000 years ago: moraines, fluvial deposits, beach deposits, talus and scree. Even volcanoes were active during parts of the Quaternary in northwestern Svalbard. Thermal springs which are related to this volcanism are still active.