The levels of pollutants in Antarctica are, in general, lower than elsewhere in the world. This applies to those in the air, water, sediments, animals and plants, and is primarily because there is less industry and farming in the Southern Hemisphere. Because the pollutant problem has so far not been regarded as significant in Antarctica, there is no overall monitoring programme for pollutants here. There are currently few investigations of levels of pollutants in the Antarctic marine food chain. The Antarctic Peninsula and Ross Bay are the two most investigated areas.

The levels of pollutants in Antarctica are, in general, lower than elsewhere in the world. This applies to those in the air, water, sediments, animals and plants, and is primarily because there is less industry and farming in the Southern Hemisphere. Because the pollutant problem has so far not been regarded as significant in Antarctica, there is no overall monitoring programme for pollutants here. There are currently few investigations of levels of pollutants in the Antarctic marine food chain. The Antarctic Peninsula and Ross Bay are the two most investigated areas.

Conditions in Antarctica are important for how the pollutants are taken up in the environment, are dispersed and the types of effects they may have. Antarctica is cold, has little precipitation, no industry and only a few human settlements. The pollutants present in the Antarctic are therefore chiefly transported from far away (in the atmosphere or by ocean currents) and accumulate in ice and snow.

The emission of pollutants like chlorofluorocarbons (CFCs) has been of greatest significance in the Antarctic because they have contributed strongly to the depletion of the ozone layer over the continent. This, in turn, has had consequences for animal and plant life which has been exposed to radiation. The hole in the National Aeronautics and Space Administration (NASA).

In the summer thaw, pollutants are liberated from snow and ice, chiefly that from the previous year. However, concern is being felt for the side-effects of a warmer climate, since pollutants that accumulate in ice, in particular, but also in permafrost or soil, may be liberated over time.

Because the pollutant problem has so far not been regarded as significant in Antarctica, there is no overall monitoring programme for pollutants here. The Antarctic Peninsula and Ross Bay are the two most investigated areas.

The levels of contaminants in Antarctica are, on the whole, lower than elsewhere in the world. This applies to those in the atmosphere, water, sediments and animals and plants.

Comparatively few studies of atmospheric contamination have been undertaken in Antarctica and the Southern Hemisphere. The studies that have been performed have largely focused on transport mechanisms and processes with a view to distinguishing local sources from far-transported contamination. It has been shown that aerosols (and, hence, atmospheric transport) are the most important medium for long-range transport of pollution to Antarctica.

In 2007, Norway set up a measuring station at Troll, in Dronning Maud Land in Antarctica. The Norwegian Institute for Air Research (NILU) is responsible for monitoring among others mercury, organic pollutants, hydrocarbons and CO2. Preliminary conclusions from this monitoring confirm that concentrations of a number of organic pollutants in the atmosphere are lower than background levels in the Arctic. The measurements at Troll also show that HCB? (a herbicide) is the dominant pollutant, as it is in the Arctic, too. The pollutant levels fluctuate through the year, in line with when coastal air masses meet the continent.

A few isolated studies of contaminants in the waters around the Antarctic have been performed. A study from the Ross Sea showed that levels of organic pollutants were closely linked with the amounts of suspended material which, in turn, vary through the summer. This is related to melting of sea ice and liberation of particles which were frozen into the ice.

In the same area, a clear link has been observed between the amount of PCBs in the seawater and the melting of sea ice. The PCB? level in surface water is initially low (130 pg/l), but rises by up to 30-40 % when the ice melts. This rise is due to liberation of PCBs originating from atmospheric fall-out through precipitation, for example, and which have been locked in the ice for a period after the sea froze.

The ice in Antarctica acts as an archive for studies of earlier and present-day transport of contaminants to the Antarctic, and the ice cores can therefore be used as climate archives from which scientists can acquire information.

Time series analyses of lead in snow samples from Coats Land, Victoria Land and Law Dome showed that lead levels have varied from 1880 to the present day, but there has been an obvious decline following the ban on lead in fuel in the 1980s.

Analyses of ice and snow samples from other parts of Antarctica suggest that the continent has also received a significant supply of other metals from the atmosphere, including chromium, copper, zinc and arsenic.

Contaminants in the sediments have been investigated in connection with the research stations in the Antarctic. PAH? levels in the sediments close to the Brazilian research station in Admiralty Bay were found to be three times higher than in uninhabited areas. Sediment samples from the vicinity of McMurdo, the American base in McMurdo Sound, and near the American Palmer Station, showed that the sediments were contaminated with both PCBs and PAHs. Recent studies at the McMurdo Station and New Zealand’s Scott Base have revealed brominated flame retardants in the inside air and wastewater.

Organic pollutants in plankton have mostly been investigated near the research stations and their sewage systems. The results are therefore not especially representative for plankton in Antarctica. Studies of contaminants in krill, a key species in the Antarctic ecosystem, have shown that HCB? is the most dominant contaminant. The studies have so far not found any biomagnification? from plankton to krill.

Fish which live on the shelf, such as emerald rockcod, contain contaminants like DDT?, PCBs and PAHs in levels corresponding to those in their most important food item, krill. The levels are lower than in fish in other waters. Bottom-living fish species have somewhat higher levels of contaminants because they feed on other nutrient sources than krill.

Marine mammals in Antarctic waters have far lower levels of contaminants than those in the Arctic. However, it has been found that levels of some herbicides rose in 1984-1994 in species living in the south, whereas they fell in the north. This means that the herbicides were still being used in the Southern Hemisphere, whereas they were banned in the north. Weddell seals at George V Land have the lowest values in the world of DDT and PCBs in their blubber, and they are also lower than in seals elsewhere in Antarctica. This shows that the variations may be great within Antarctica, too.

Emperor and Adélie penguins are good indicator species for the marine food chain because they breed on the continent itself. Adélie penguins have a low transfer rate for PCBs and DDT from mother to chick, only 4 %. In general, the concentrations of organic pollutants in penguins are lower than known threshold values for toxicological effects. However, as no research has been performed on threshold values for penguins, no conclusions can be drawn about this. Studies from Palmer Station show that levels of DDE (a breakdown product of the herbicide, DDT) have not changed in Adélie penguins on the Antarctic Peninsula for 30 years, in contrast to DDT levels, which fell significantly in 1975-2003 in seabird eggs in Antarctica as a whole.

A baseline survey carried out in 1997 on the Antarctic Peninsula focused on levels of heavy metals in Antarctic organisms (34 species of algae, filtering animals, invertebrates and vertebrates). Mercury was only found in elephant seals and seabirds in low levels, whereas cadmium was found in low levels in the majority of organisms, except fish. Some invertebrates had very high contents of zinc, whereas the highest copper levels were found in a snail.

Antarctica has no industry or agriculture and only a few settlements, all of which are research stations. Human activity otherwise is associated with fisheries and tourism. There are few local sources of pollution. The main sources are therefore areas on the Earth with a high population density and industrial activity. The contaminants are transported long distances by means of the circulation in the atmosphere and the ocean currents 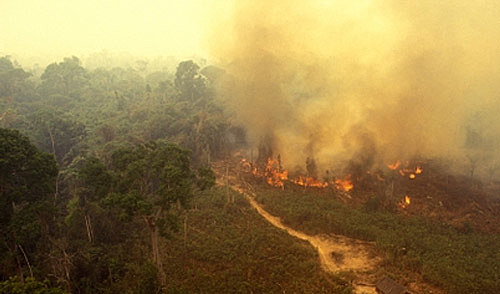 Atmospheric transport is the main means by which contaminants reach Antarctica. The closest sources are furthest south in South America. The Troll Observatory has been able to trace aerosols measured at Troll back to forest fires in Brazil four weeks earlier. Emissions from tropical regions therefore soon reach the north coast of the continent. 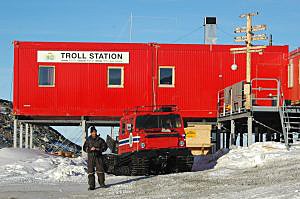 The research stations contribute very local pollution due to emissions and discharges of domestic waste, effluent and incineration. No systematic attempts have so far been made to model the consequences of local sources of pollution, including cruise ships and discharges in connection with scientific activities on the continental scale in Antarctica. However, studies at certain stations have recently focused increasingly on the contaminant load.

Enhanced PAH? levels, traceable to diesel aggregates, were found at the Argentinian Carlini Station (formerly Jubany). PAH levels, three times higher than in uninhabited areas, have been found in sediments near the Brazilian research station in Admiral Bay. Sediment samples from the vicinity of the American bases at McMurdo and Palmer have shown that the sediments are contaminated by both PCB?s and PAHs. Recent investigations at McMurdo and the Scott Base (New Zealand) have revealed brominated flame retardants in both the inside air and the effluent. All these compounds are typical contaminants in areas with human activity.

Analyses of snow and ice cores from Coats Land, Victoria Land and Law Dome have shown that Antarctica was contaminated as early as 1880 by lead that could be traced back to the metallurgical industry in South America, South Africa and Australia. Another source may have been steamships. Lead levels then sank in the 1920s, and it has been speculated that this was related to the opening of the Panama Canal in 1914, which resulted in less shipping. Lead contamination then increased significantly during the Second World War (1939-1945) due to more activity in the metallurgical industry and a high lead content in petrol. The analyses of the snow samples have shown a reduction from the 1980s to the present day, probably because of the introduction of lead-free fuel.

A study of a number of organic pollutants (derives from heptachlor, an insecticide.” data-hasqtip=”8″>heptachlor epoxide) in air, seawater, sea ice and snow from the Antarctic Peninsula has shown that the levels of several of the substances have declined. Heptachlor epoxide levels, however, have not dropped during the past decade, suggesting that heptachlor is still being used in the Southern Hemisphere. It was used a great deal to combat termites in the 1960s and ‘70s. The USA banned its use in 1988.