Ocean acidification in the Arctic

In simple terms, it was thought that the sea ice cover restricts the exchange of gases between the water and the atmosphere, and that this also limits primary production in the area – which also influences gas exchange. Recent research has shown that this is not quite correct, since there are a number of processes associated with sea ice that increase the gas exchange. Researchers are working to quantify the effects of all the different processes in order to produce better estimates of the development of ocean acidification in the Arctic.

More CO2 can be dissolved in cold than in warmer water, so, in respect of ocean acidification, there is a special focus on the Arctic. In addition, the light conditions (24-hour daylight) mean that phytoplankton are active more continuously around the clock, which also results in less pH variation over each 24-hour period. In these areas, it is more interesting to study the annual fluctuations in the phytoplankton’s effect on pH in the upper water layer. Large spatial variation of pH in the Barents Sea has also been documented, which may be due to the oxidation of organic material transported from the land and rivers.

The Arctic is the part of the Earth where the first studies of the effects of ocean acidification are expected to take place. It is at higher latitudes that the sea is expected to first become undersaturated in calcium carbonate. In fact, seasonal undersaturation of aragonite has already been measured at the surface in northern parts of the Arctic Ocean, and models show expectations of constant undersaturation by the middle of this century.

The volume of the summer ice in the Arctic has been dramatically reduced over a few decades, which has led to accelerated absorption of CO2 in the Arctic Ocean, while the brackish water from melting is poor in calcium ions (Ca2 +). Increasing runoff from rivers, where the river water also has a low calcium content, is also contributing to the undersaturation of aragonite in the surface water. Researchers believe we are now heading at full speed towards a tipping point for aragonite in the Arctic Ocean.

Global warming may potentially destabilise large amounts of methane clathrates (frozen methane) stored in the seabed sediments, especially on the continental slopes. This will cause the release of methane into the water column and the atmosphere, which increases vulnerability to ocean acidification in the Arctic. In the East Siberian Sea, large quantities of methane have already been observed leaking from the seabed.

What is ocean acidification?

Over the last 200 years, the oceans have taken up around a quarter of man-made CO2, and, worldwide, the average acidity of surface ocean waters has risen by 26 per cent.

Calcium carbonates are important building blocks for shell-building marine organisms. This substance comes in two forms – calcite and aragonite – each with their own saturation horizon.

Calcium carbonates are important building blocks for shell-building marine organisms. This substance comes in two forms – calcite and aragonite – each with their own saturation horizon.

Laboratory and field studies show that both planktonic and benthic (bottom-dwelling) species experience reduced calcification rates at lower pH. It costs them more energy to build their shells, and the shells may be less robust, which in both cases may have consequences for survival and reproduction.

The chemistry of ocean acidification

CO2 molecules occur in seawater in four different forms: undissolved (CO2 (aq)), as carbonic acid (H2CO3), and in two ionic forms – bicarbonate (HCO3-) and carbonate (CO32-). The composition of these carbon compounds depends on temperature, pressure and the chemical composition of the water – which in turn is affected by latitude and depth. Consequently, ocean acidification is not uniform around the world. 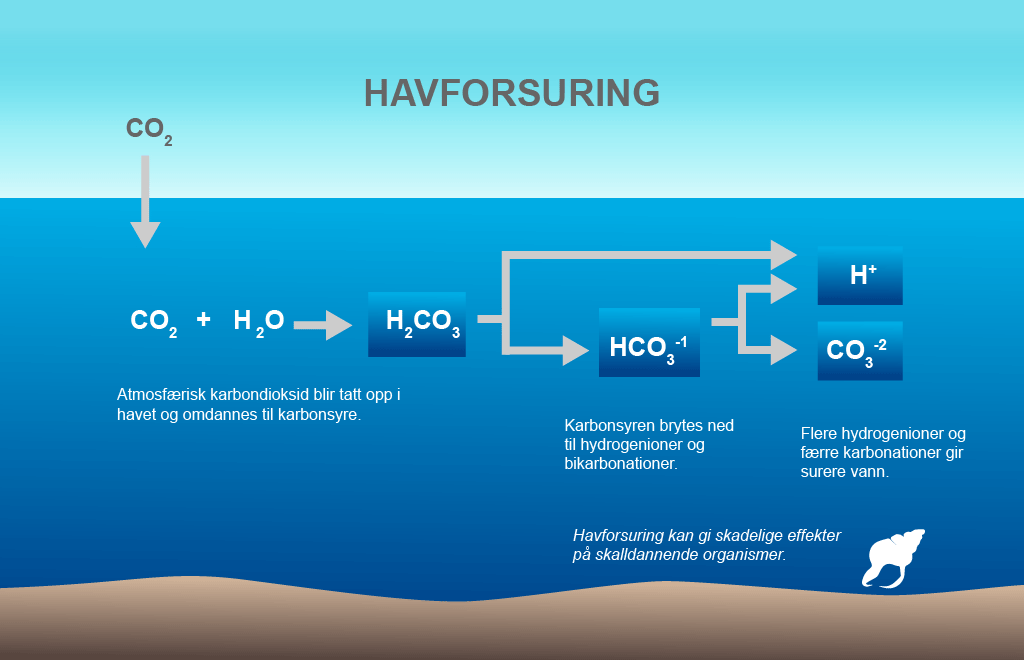 Carbon dioxide is dissolved if the equation is read from left to right and is formed if the equation is read in the other direction. This process allows the sea to take up large proportions of atmospheric CO2 without a dramatic reduction in its pH. But the buffer capacity has its limitations and the expectation is that when this effect gradually diminishes, acidification due to the atmospheric CO2 concentration will be amplified. Illustration: Norwegian Polar Institute (from figure by University of Maryland)

This is what is referred to as the carbonate system, which gives seawater its buffering capacity. This means that the increase in dissolved CO2 is less than the amount of CO2 actually taken up by the sea.

Ocean acidification can potentially impact much of marine life, whether through direct or indirect effects. Ocean acidification may cause problems for animals that rely on calcium to build a shell or skeleton. Plankton species, shrimps, lobsters, snails, clams, starfish, sea urchins and corals are vulnerable. In the worst case, many species may die out or be out-competed by others that are better able to tolerate acidification.

The effect of ocean acidification on phytoplankton and primary production has been a focus area for research into the subject. Inorganic carbon is an essential building block for photosynthesis, and it has been expected that the increase in CO2 may boost primary production.

For macroalgae, this effect can be seen, but there is no consistent pattern of development for phytoplankton in the Arctic. This may be due to a highly effective system for taking up carbon present in many species of phytoplankton, and different responses are seen in different species, groups and even within the same species. It is difficult to study the effects of ocean acidification at species level alone, since there are a number of determinants that act together and are difficult to isolate in studies.

Most calcifying species appear to have a reduction in their calcification rate at a lower pH, but recent studies also show that a wide range of marine phytoplankton species are resistant to more acidic seas.

The effect of ocean acidification on phytoplankton and primary production has been a focus area for research into the subject. Inorganic carbon is an essential building block for photosynthesis, and it has been expected that the increase in CO2 may boost primary production.

For macroalgae, this effect can be seen, but there is no consistent pattern of development for phytoplankton in the Arctic. This may be due to a highly effective system for taking up carbon present in many species of phytoplankton, and different responses are seen in different species, groups and even within the same species. It is difficult to study the effects of ocean acidification at species level alone, since there are a number of determinants that act together and are difficult to isolate in studies.

Most calcifying species appear to have a reduction in their calcification rate at a lower pH, but recent studies also show that a wide range of marine phytoplankton species are resistant to more acidic seas.

In the Arctic, large copepods are important species in the ecosystem – in the Atlantic sector of the Arctic, the three Calanus species, in particular: C. finmarchicus, C. hyperboreus, and C. glacialis but also the smaller Pseudocalanus sp. These are key species that constitute 80-90% of the total zooplankton biomass. They feed on phytoplankton and are a vital food source for a variety of animals – various species of fish, whales and seabirds.

Pteropods (sea butterflies) are a group of molluscs that swim in the water using adapted feet. They provide sustenance for predatory species such as herring, salmon, whales and seabirds. The pteropod Limacina helicina has been widely studied due to its ecological function as a food source for many organisms, and because it has a shell of aragonite that is prone to degradation at reduced pH. In a number of places in the world, damage to pteropods due to undersaturation of calcium carbonate in the seawater has already been recorded, while other studies show that they are able to maintain their shells in undersaturated water but they expend a lot of energy on doing this, so there is still a negative effect.

Ocean acidification is not expected to have direct effects on seabirds and marine mammals. There may however still be indirect effects through changes in the food web and consequently in their prey. In particular, mammals and birds that depend on shell-building species are vulnerable to such effects, and must switch to other prey species if their availability declines.

Arctic food chains are relatively simple and are consequently susceptible to influences. Compared to ecosystems closer to the equator, there are few key species at each trophic level. This means that if a prey species becomes almost extinct or moves to other areas due to ocean acidification, there are few alternatives if no new prey species move into the area. Predators must switch to other source of nutrition or relocate. Controlled studies also show complex responses with much variation in response within the same species. Natural selection of those individuals that better tolerate ocean acidification may then be a consequence, with the risk of the diminution of other characteristics being passed on to the next generation.

There is a great need for more studies on the ecosystem effects of ocean acidification, both simpler, predator-prey studies and more complex, ecosystem response studies.

Corals have shells of aragonite, and form reefs of different sizes that are important habitats for many other species. Limited impact has been shown on the most well-known coldwater coral Lophelia, especially if other physical and biological conditions are good. Lophelia forms large reefs in deep water off the Norwegian coast, and these reefs are important habitats for many deep-water animals. Older Lophelia skeletons and dead corals are expected to gradually dissolve if the water masses have a low pH. Effects on the early life stages of Lophelia and on other species are unknown. Nor is there detailed knowledge of the ecological effects of a potential reduction in the benthic habitats that corals create.

Effects on bivalves, echinoderms, crustaceans and a number of other calcifying benthic species will have far-reaching effects on the Arctic food chains. Such species are expected to respond negatively to ocean acidification. For starfish, primarily negative effects of ocean acidification have been documented, while for some species in some studies, no effect has been shown. The different species are vulnerable at different life stages; for example, some species are especially vulnerable during calcification at the larval stage.

The effects on many non-calcifying organisms are unknown. In general, both juveniles and adult fish have the capacity and flexibility in their acid-base balance systems to handle the expected change in pH over this century. Conversely, fish eggs and early larval stages have less-developed systems for handling changes in CO2 levels in the water. There are few studies that provide a basis for saying anything very substantive about the complete effects, since laboratory studies over several developmental stages, not to mention several generations, are nearly non-existent.

Knowledge of the effects on fish derive almost exclusively from non-Arctic species, with the exception of the commercial species of Atlantic cod (Gadus morhua) and walleye pollock (Theragra chalcogramma), where a number of studies have been performed. For these species, developmental abnormalities have been found at early life stages, while juveniles and adult fish appear to be handling increased CO2 levels well. The studies were conducted on southern populations of these species, so the knowledge may not necessarily be transferable to the populations living in Arctic waters. It is possible that adaptations among Arctic populations to a different climate and other habitats increase sensitivity to ocean acidification, or that their physiological ability to adapt to increased CO2 levels may be limited at low water temperatures that restrict physical processes in the fish.

The polar cod (Boreogadus saida) is a circumpolar key species. It accounts on its own for 75% of the energy transported from zooplankton to vertebrate predators such as seabirds, seals, whales and polar bears. Calanoid copepods are the main food of polar cod, and there is not expected to be a negative effect from ocean acidification on the polar cod due to access to prey.