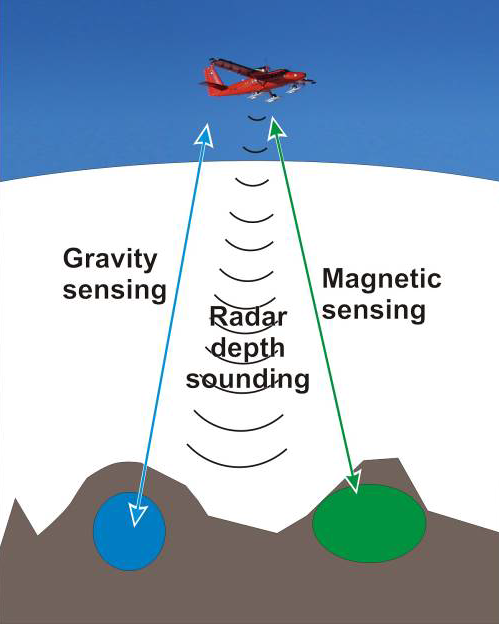 Using the BAS survey aircraft, a Twin Otter fitted with a range of sensors, we will explore the region around South Pole, much of which has never been seen, let alone studied before. The figure illustrates the key scientific techniques.
– Gravity sensors: Map regional variations in the geoid (global gravity field) and density variations in the local underlying rocks.
– Radar: Reveals subglacial topography, subglacial lakes and layers in the ice.
– Magnetic sensors: Map magnetic properties of underlying rocks.
– Laser and ASIRAS radar: Ice surface elevation and shallow snow processes. 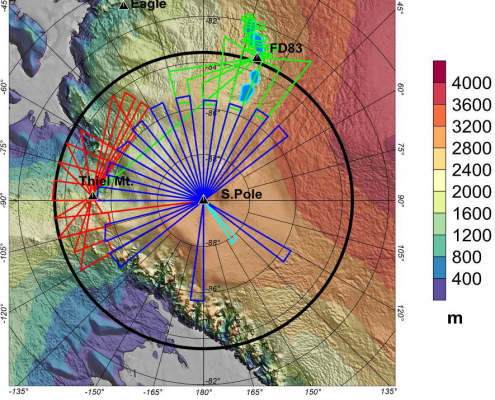 The main focus of the PolarGAP project is to provide new high-resolution gravity data for global gravity and geoid (sea level) models. These global geodetic models typically rely on satellite gravity data. However, the satellite orbits do not track over the poles, leading to significant gaps and potential errors in the global models. Airborne gravity data provide the key bridging data set completing these global models. Improved geodetic models are critical for a number of applications ranging from improved planning of satellite orbits, to better definition of surveying datum’s.

During the PolarGAP survey we will be exploring one of the key frontier regions in Antarctica between South Pole and the Weddell Sea using a range of geophysical techniques. East Antarctica is a geological composite, made up of a mosaic of tectonic fragments scarred by ancient sutures and cut by rifts. This survey will allow linking between the sparse rock outcrops towards the coast and previous geophysical surveys in the continental interior. The data will provide unique new insights into sub-ice geology and the evolution of the crustal architecture of East Antarctica, and will lay the foundations for future research.

The study area we are targeting includes the catchments of the massive Support Force, Foundation and Recovery Glaciers. These ice streams provide a key link between the vast ice mass on East Antarctic plateau and potentially unstable West Antarctic ice sheets and Filchner Ice Shelf. Our new radar measurements of ice thickness, subglacial topography, basal water, and ice sheet internal layers will better constrain both the processes operating beneath the ice sheet interior today, and the past and possible future evolution of the ice sheet. This is particularly critical close to the subglacial Recovery lakes, which could be a store of water capable of lubricating ice flow down-stream. These enigmatic subglacial lakes will be targeted with dedicated flights flown from the FD83 field camp.

Our final science target relates to the processes operating on the ice sheet surface. Satellite data shows a pattern of cross-over errors in surface elevation. This pattern is hypothesised to reflect anisotropy of the shallow snow fabric due to the consistent prevailing wind direction. By flying the ASIRAS radar, an analogue of the space-borne system, over these anomalies we will test this hypothesis. Additional data from a scanning LIDAR system will provide new information about the ice sheet surface, unattainable by satellite observations.

The project is funded primarily by the European Space Agency (ESA).