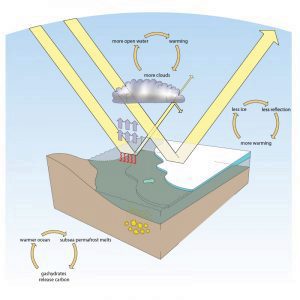 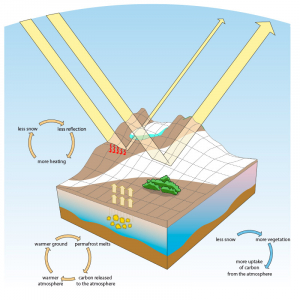 Albedo is an expression of the ability of surfaces to reflect sunlight (heat from the sun). Light-coloured surfaces return a large part of the sunrays back to the atmosphere (high albedo). Dark surfaces absorb the rays from the sun (low albedo).

Ice- and snow-covered areas have high albedo, and an ice-covered Arctic reflects solar radiation which otherwise would be absorbed by the oceans and cause the Earth’s surface to heat up. The proportion of the Earth’s surface that is covered by snow and ice has a great deal to say for how much of the incoming solar radiation is reflected or absorbed. Low albedo (dark surfaces) leads to higher uptake of energy and, hence, warming. Moreover, when more ice and snow melt, there will be more dark surfaces. This is therefore a self-reinforcing effect. Climate change in the Arctic is consequently important for the development of climate change globally.

Notify
Climate in the ArcticCRiceS Scroll to top