Researchers have found that an ice shelf in East Antarctica melts five times faster from the ocean near its ice front than elsewhere on the ice shelf. The reason is that surface-warmed ocean water gets pushed by wind underneath the ice-shelf front and melts the ice shelf from below.

Researchers have found that an ice shelf in East Antarctica melts five times faster from the ocean near its ice front than elsewhere on the ice shelf. The reason is that surface-warmed ocean water gets pushed by wind underneath the ice-shelf front and melts the ice shelf from below.

A joint research team from Norway and India is behind the study that was recently published in the scientific journal The Cryosphere. The results are in line with the conclusions of the IPCC’s special report on the ocean and cryosphere in a changing climate that was recently released. Global warming is twice as fast as it was 25 years ago, ice is melting both north and south on the globe and the global sea level is rising. Antarctica’s contribution to global sea level rise will likely increase because additional ice is expected to melt in the south.

–  Our study highlights that although many of the ice shelves in East Antarctica generally melt only little from its base facing to the ocean, their fronts to the sea have higher melting rates due to the influence of summer warmed surface water, explains researcher and first author of the study, Katrin Lindbäck from the Norwegian Polar Institute. 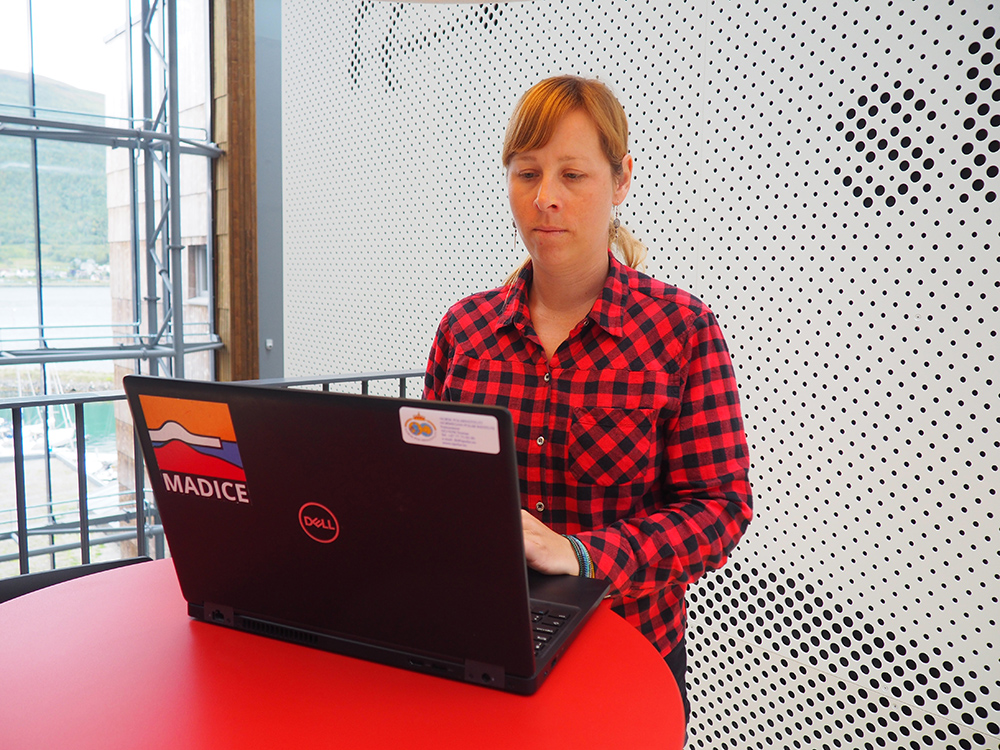 The Southern Ocean has warmed over recent decades and may have an impact on the melting of the ice shelves in East Antarctica but the impact is unknown at present, explains researcher and first author of the study, Katrin Lindbäck. Photo: Elin Vinje Jenssen / Norwegian Polar Institute

The Southern Ocean is warming up

The study was carried out at Nivlisen, an ice shelf in central Dronning Maud Land, facing the Atlantic Ocean. Dronning Maud Land covers a large area of ​​East Antarctica and has a 2000 km long coast with extensive ice shelves.

East Antarctica has so far not had similar excessive ice-shelf melting as in West Antarctica, where warm seawater rises from the deep ocean and melts the ice shelves rapidly from below. However, the coastal region where the ice meets ocean can rapidly change in coming decades or centuries.

– The Southern Ocean has warmed over recent decades and may have an impact on the melting of the ice shelves in East Antarctica but the impact is unknown at present, says Katrin Lindbäck. 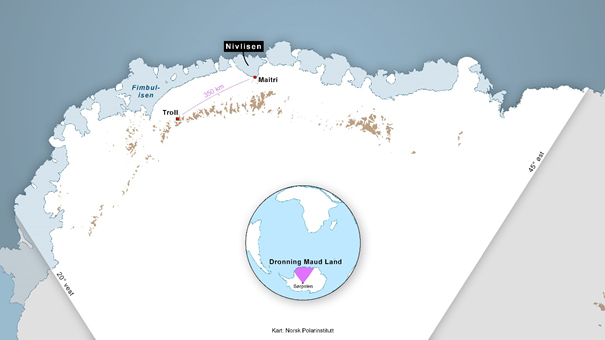 The location of Dronning Maud Land, Nivlisen and the location of the research stations of Norway (Troll) and India (Maitri). Map: Anders Skoglund / Norwegian Polar Institute

The sea level is rising

The IPPC’s special report shows that for over a hundred years, the global sea level has risen by around 16 cm. In the future, it is expected that the loss of ice along the Antarctic coast (calving and melting) will be greater than the increase in the inland ice caused by increased precipitation. Therefore, Antarctica will continue to contribute to sea level rise overall.

The Antarctic ice sheet contains freshwater equivalent to 57 meters of global sea level rise. Current knowledge suggests that the contribution from Antarctica will lead to a few tenths of meters more during this century. However, the situation is still serious and real.

– The grounded ice feeding into the floating ice shelves in Dronning Maud Land has the potential of raising global sea levels by approximately 7 meters, says Lindbäck. 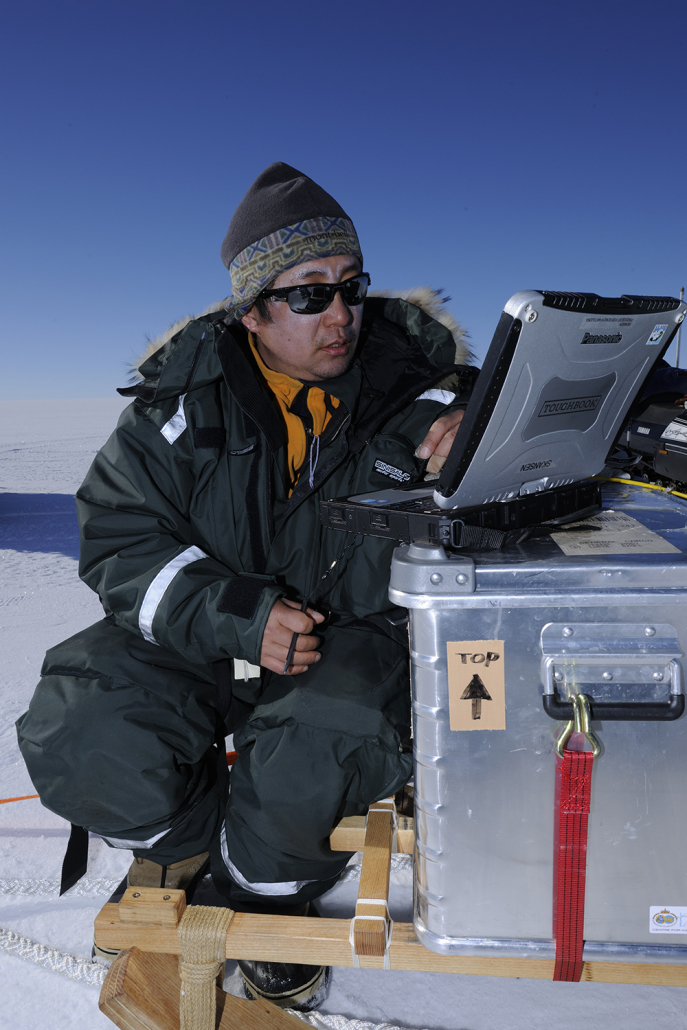 –  We relied on both Norwegian Troll Station and Indian Maitri Station, which are neighbors with the Antarctic standard, but lie 350 km apart. The collaboration with India therefore provided a unique opportunity for Norway to study the areas close to the Indian station, says co-author and project manager Kenichi Matsuoka from the Norwegian Polar Institute. Photo: Elvar Ørn Kjartansson / Norwegian Polar Institute

The inland ice is affected

The international research team conducted three field campaigns to the coastal area. They collected both geophysical and ice core data. Lindbäck herself participated as the only female in two of the research expeditions on the ice in Dronning Maud Land, most recently in 2018.

The project collaborates with India’s Antarctic program and received logistics support from the Indian station Maitri.

–  We relied on both Norwegian Troll Station and Indian Maitri Station, which are neighbors with the Antarctic standard, but lie 350 km apart. The collaboration with India therefore provided a unique opportunity for Norway to study the areas close to the Indian station, says co-author and project manager Kenichi Matsuoka from the Norwegian Polar Institute. 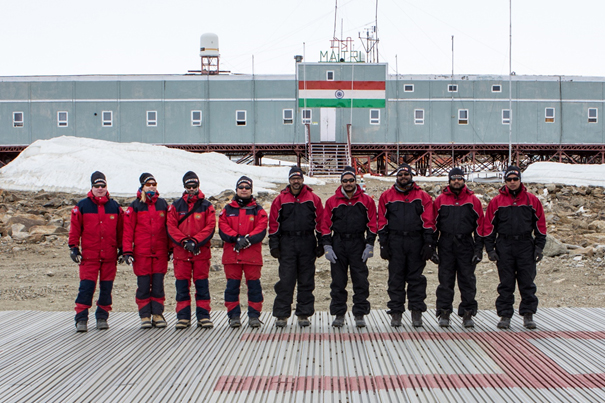 The instruments were dug down in the snow

The researchers collected data using an ice-penetrating radar technique called ApRES, developed by the British Antarctic Survey. With this instrument they could measure yearly melting with very high precision under the ice shelf at many locations. The instruments were also dug down in the snow to measure melting continuously during the Antarctic winter, and dug out again the next field season during the Antarctic summer. However, it was not always easy to find the instruments after a long, cold and harsh winter in the ice.

–  When we returned after the winter next year, we had to dig two to three meters to get the instruments out of the snow. Sometimes it was very hard work. Once we started digging, but were stopped by a blizzard. The next day the holes were covered with snow and we had to start the digging all over again, says Katrin Lindbäck.

In addition to documenting the changes at Nivlisen ice shelf, they made useful experiences related to how methods and tools work in the field.

– The study shows the use of and need for measurements in the field to monitor Antarctica’s coastal margins. These detailed variations in basal melting are not captured in satellite data but are important to predict future changes.

Work ongoing on the largest Arctic expedition or Life in the dark and cold or...
Scroll to top