Work ongoing on the largest Arctic expedition or Life in the dark and cold or What’s going on at the North Pole?

Already since early December Dmitry Divine, a researcher at the Norwegian Polar Institute, and many international colleagues have been working in the cold and dark of the Arctic Ocean on the largest Arctic research expedition to date - MOSAiC (Multidisciplinary drifting Observatory for the Study of Arctic Climate).

Already since early December Dmitry Divine, a researcher at the Norwegian Polar Institute, and many international colleagues have been working in the cold and dark of the Arctic Ocean on the largest Arctic research expedition to date - MOSAiC (Multidisciplinary drifting Observatory for the Study of Arctic Climate).

MOSAiC  is based on the German research icebreaker Polarstern, drifting for a full year across the Arctic Ocean, the same way Nansen drifted with Fram 125 years ago.

Back then it took three years for Fram to drift across the Arctic Ocean, now it is expected to take about a year. A sign of the dramatic changes that have occurred in the Arctic.

To get to Polarstern, which set sail from Tromsø in September 2019, and started drifting with the ice off Siberia in early October 2019, Divine had to travel for a few weeks aboard a Russian icebreaker that departed Tromsø in late November and took the group of scientists to Polarstern through the Barents Sea and the sea ice on the way to Polarstern. The plan is that he is back in Tromsø sometime in March, but it all depends on the ice conditions the Russian icebreaker will meet on the journey to return with the crew and scientists. Usually scientists spend a period of about two months onboard and are then replaced by a new group of scientists either by icebreaker or later in spring by airplane.

Scientists Sebastian Gerland (left), Dmitry Divine and Mats Granskog are all involved in MOSAiC. Only Divine participate in the cruise itself. The picture is from when Divine left Tromsø in November. Photo: Elin Vinje Jenssen / Norwegian Polar Institute

Life on board a research vessel is about work, 24/7, but the work rhythm is strongly affected by the three daily hot meals, when people can gather together and warm up after working out in the cold. Since it is pitch dark all day life is evolves around meal times and work out on the ice and onboard the ship keeps everyone more than busy. After all, everyone came her not only for experience, but also for a science mission, to better understand the changing Arctic icescape.

Divine, together with colleague Lasse Mørk Olsen, a researcher at the University of Bergen, is onboard to study sea ice ridges as part of a Norwegian Research Council funded project HAVOC led by the Norwegian Polar Institute with a team from several other Norwegian institutes, that is specifically examining the role of sea ice ridges, which forms when ice floes collide with each other and pile of blocks of ice on top of each other. They are one of least studied parts of the Arctic ice pack.  HAVOC’s mission is to better understand the role of sea ice ridges on physics and ecology in the Arctic Ocean. Nowadays most of the thinner sea ice melts in summer and only the thickest parts, the ridges, survive the summer melt. Divine and Olsen are the first pair of scientists part of the HAVOC project to be onboard Polarstern, four more will join the expedition in the period from June to September.

“Being able to do observations over a full year in the Arctic pack ice is unprecedented, at least to the ambition level of the MOSAiC project, it is just an Arctic scientists dream!”, says HAVOC project leader Mats Granskog from the Norwegian Polar Institute. He is closely following the progress of the work remotely from his office in Tromsø.

“Although Polarstern is so far away isolated in the ice near the North Pole, todays satellite communication makes it possible to be in touch with people on Polarstern on a daily basis, quite unlike in Nansen’s days”, tells Granskog. “I am probably more anxious here back at the home-base, than Dmitry and Lasse who are too busy working to care. They are really facing tough conditions, where both humans and the scientific equipment are put to the test. Kudos to them and their colleagues onboard”.

Divine tells that “on a day when the temperature rose to -18C it felt like summer”. That tells a bit about the conditions out on the ice. Temperatures typically drop below -30C, and with wind chill it is often very cold. 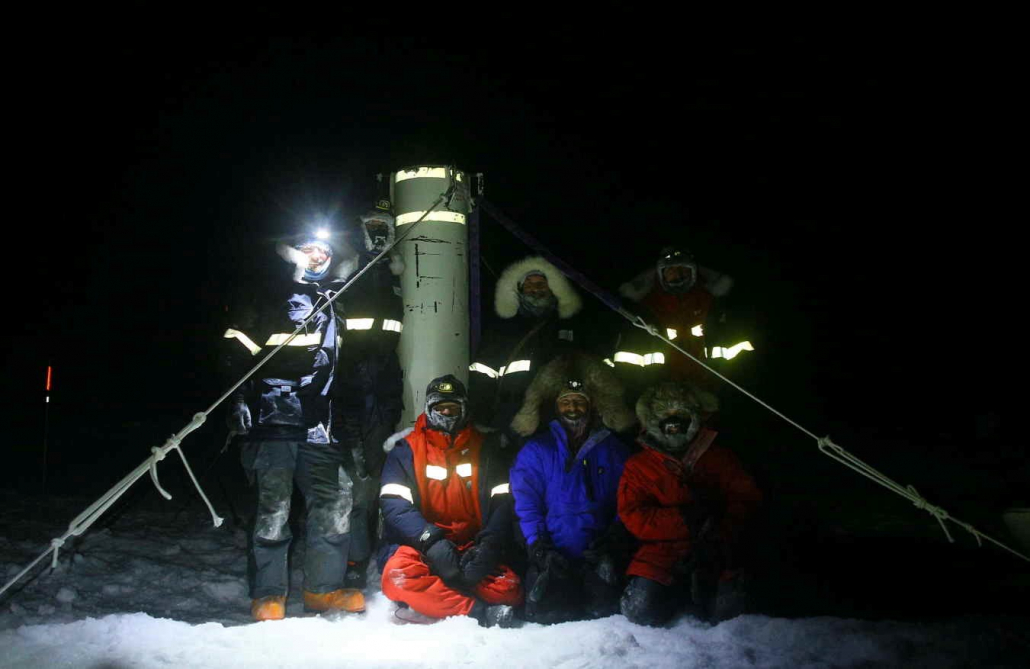 Divine with colleagues after successfully deploying one of the instruments of the HAVOC project in the ice a few kilometres away from Polarstern. Photo: Polona Itkin / UiT- the Arctic university of Norway.

When working in such conditions safety comes first. The cold and dark make things difficult, and one has to be really careful to not get frost bites. Even the simplest thing can become very time consuming. And not only that, also polar bears roam on the ice, and one must keep watch for them too. Anytime there are people on the ice, there are polar bear guards on the ice and watches onboard the ship, to look out for bears. Neither is the sea ice very stable, moving around with the winds and ocean currents creating trouble to keep instruments safe on the ice. Especially at the start of the expedition, when the ice was thin after the summers melt, cracks in the ice and formation of ridges where nearly a everyday thing.

Only in the last weeks there as been signs that the sun is on its way back, with some twilight in the horizon. Bringing promise of some brighter times ahead. And soon the return trip back to Tromsø will begin, but it is unknown how long the return trip will take through the ice that has now grown thicker during the cold winter months.

You can follow the progress of the MOSAiC expedition on this page: https://follow.mosaic-expedition.org/

Notify
Melting of an ice shelf in East Antarctica is linked to summer warming of the...

Spring is in the air! (or at least in the water)
Scroll to top