Report from this year’s ARK fieldwork

This year’s field work for ARK (Arctic marine mammals in a time of climate change: a Kongsfjorden Case Study – or in Norwegian - ARktiske Klima forandringer konsekvenser) is almost completed. Today we are sitting out gale-force winds onboard the sailboat –«Meridian» that we use as a base for our operations here in Kongsfjorden, so finally have a bit of time to write a little report.

This year’s field work for ARK (Arctic marine mammals in a time of climate change: a Kongsfjorden Case Study – or in Norwegian - ARktiske Klima forandringer konsekvenser) is almost completed. Today we are sitting out gale-force winds onboard the sailboat –«Meridian» that we use as a base for our operations here in Kongsfjorden, so finally have a bit of time to write a little report. 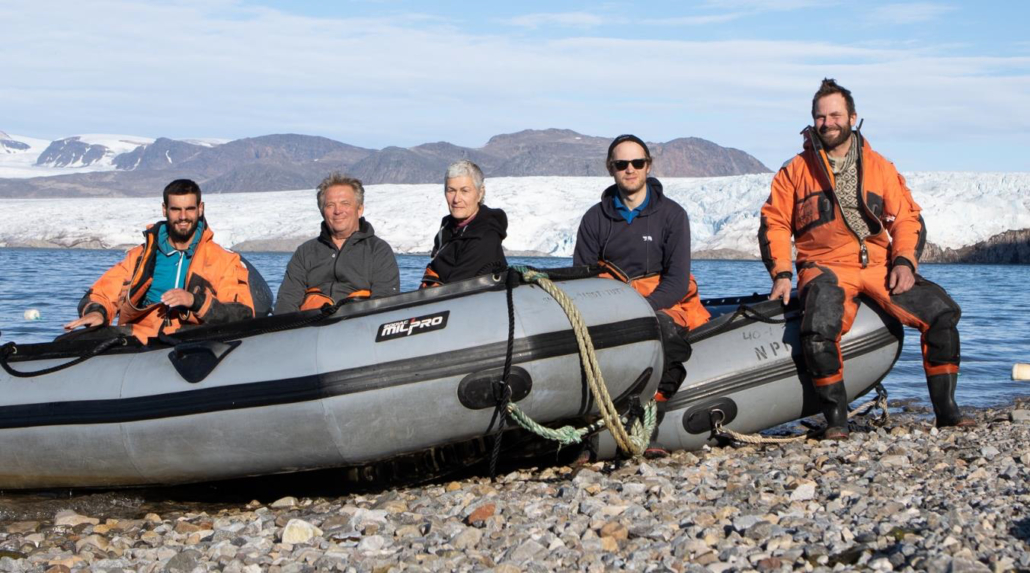 This Norwegian Research Council funded project will, among other things, equip the three resident seals species in Kongsfjorden with specially made GPS-dive recorders; two of these species are the Arctic endemic ringed and bearded seals – while the third is a «temperate» species – the harbour seal (that is currently expanding its range into west coast fjords in Svalbard) to explore potential niche overlaps and impacts of the newcomer’s presence on the long-term residents in the fjord. Normally these data loggers send data via the mobile telephone system, but since there is no mobile phone reception in Kongsfjorden the producers of the loggers (the Sea Mammal Research Unit, St Andrews University, Scotland) have made a special receiver station that we have placed up at the atmospheric station at the top of the Zeppelin mountain. The “tags” should provide us with positional data every time the seals surface to breathe and data from each and every dive that they perform. This fine-scale data on behaviour will be used to identify important habitats for each species and also to explore potential competition among them. We predict that harbour seals are increasingly common in the region and might well out-compete ringed seals in the coming decades. 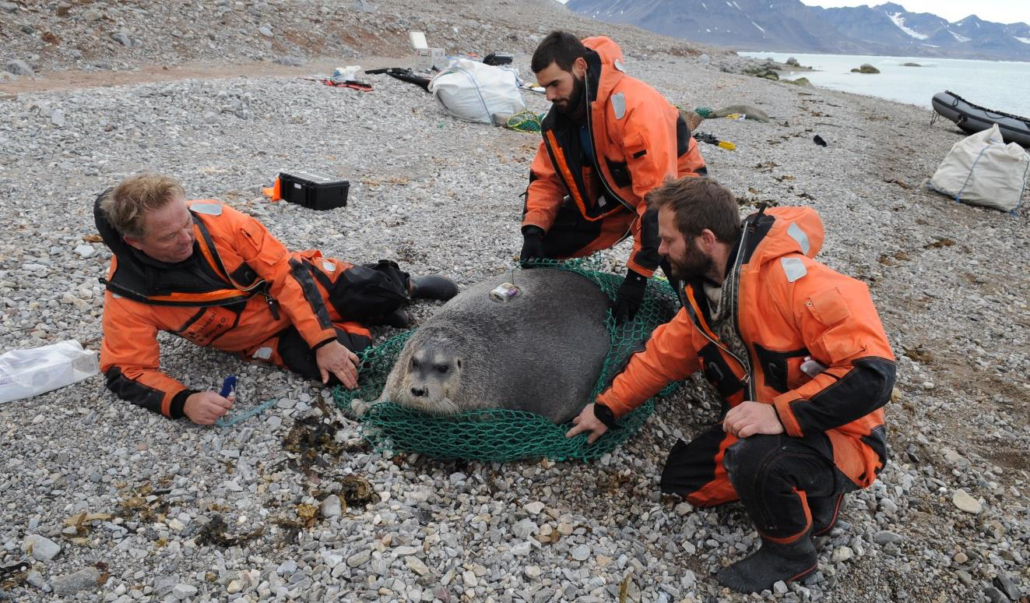 A bearded seal with the logger in place. On this species the tag is placed quite far back because of the way they swim; they often surface with their back exposed, so that the antennae and salt-water swtich are in the air with this placement, which would not be the case if the loggers were in the normal position further toward the neck. Photo: Kit Kovacs / Norwegian Polar Institute

Ringed seals are an endemic Arctic species that is highly specialised to live in close association with sea ice – they are born on it (in small snow caves), rest on it and spend their moulting period up on the surface of the ice as much as possible to make moulting efficient by circulating blood to the skin. They have a specialised diet of Arctic fishes and invertebrates that live in cold water; some of the prey are also sympagic (ice-associated) during some life stages. Harbour seals on the other hand are a temperate species that thrives in areas without sea ice. They mostly eat prey that are associated with Atlantic Water. Now that Kongsfjorden, and the rest of the west coast fjords of Spitsbergen, are more and more influenced by Atlantic Water, conditions are better and better for harbour seals, while the lack of sea ice is likely resulting in reductions in the range of ringed and bearded seals. 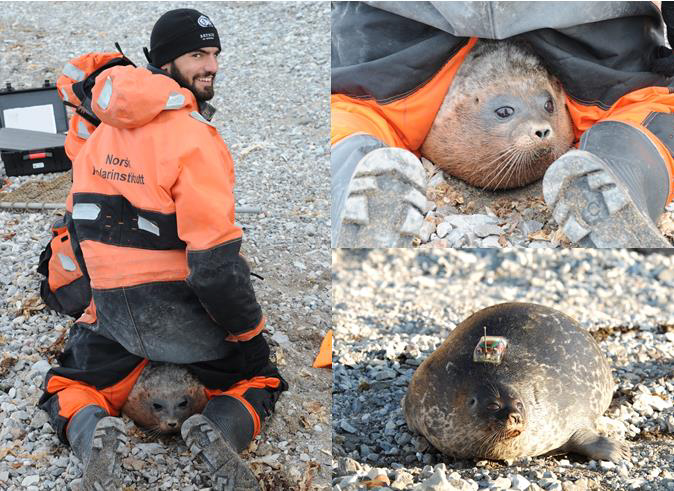 This year’s field work involved mapping locations of haul-out sites for harbour seals in Kongsfjorden and capturing and equipping all three seal species with the special GPS-dive loggers. We do this simply by setting nets from shore and waiting for seals to come by. Sometimes they swim into the nets without interference, catching themselves. But most times, we raise their curiosities by singing or arm-flapping or other such behaviour – such that they approach us to see what’s up – and hit the net that we ensure is always between them and us. There is a lot of chilly time on shore waiting for capture events, punctuated by little periods of extreme activity when a seal strikes the nets and must be extracted and brought to shore. 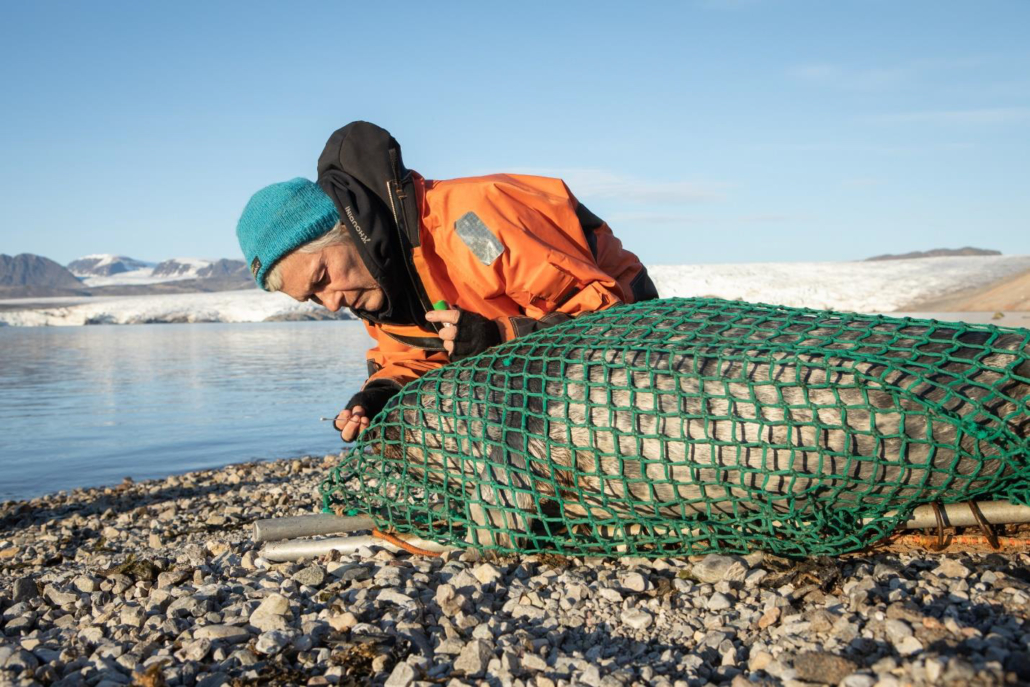 The logger is simply glued onto the hair of the seal’s using fast-setting glue. It will stay in place until the seal moults late next summer. This is why we do this field work so late in the year – so that the new hair is firmly in place, giving the tag maximum longevity.

In addtition to attaching the logger, we take a wide variety of samples to study the health (and contaminant loads) of the animals -including blood and blubber, and swabs from a host of locations to look for viruses and bacteria. They also get a quick (ecto/external) parasite check. They are thn weighed and measured and the thickness of the blubber layer is assessed using an ultrasound to determine their body condition. All captured animals also get numbered flipper tags for future identification.

The 2021 ARK field season was a big success, with lots of new information collected and all of the 17 loggers that the manufacturer could provide (in the covid-ridden world) now swimming around in the fjord on the various target seal species. We look forward to being back on-line so that we can check the performance of the loggers and have daily updates of the in-coming data over the fall!

Now and again we have a visit from the «locals» on the beach, some of which lack a good weapon-culture. Photo: Kit Kovacs / Norwegian Polar Institute