In the second half of March 2021, the annual maximum of Arctic sea ice extent was reached; reported by NSIDC to be the 7th lowest since continuous satellite monitoring started in 1979.

In the second half of March 2021, the annual maximum of Arctic sea ice extent was reached; reported by NSIDC to be the 7th lowest since continuous satellite monitoring started in 1979.

NSIDC mention the northern Barents Sea as one of the areas with ice extent below average. The Arctic sea ice situation was also discussed by Arctic Today as a relatively low maximum, as an emerging  “new normal”.

However, how does the sea ice in an Arctic region look  when being “on-site”, at spatial scales that satellites are hardly able to cover? What is the impact of the sea ice dynamics on the cycling of different chemical compounds between the ice and ocean? How do the changing physical-chemical characteristics of the ice influence ice algae and the rest of the ice-associated ecosystem? 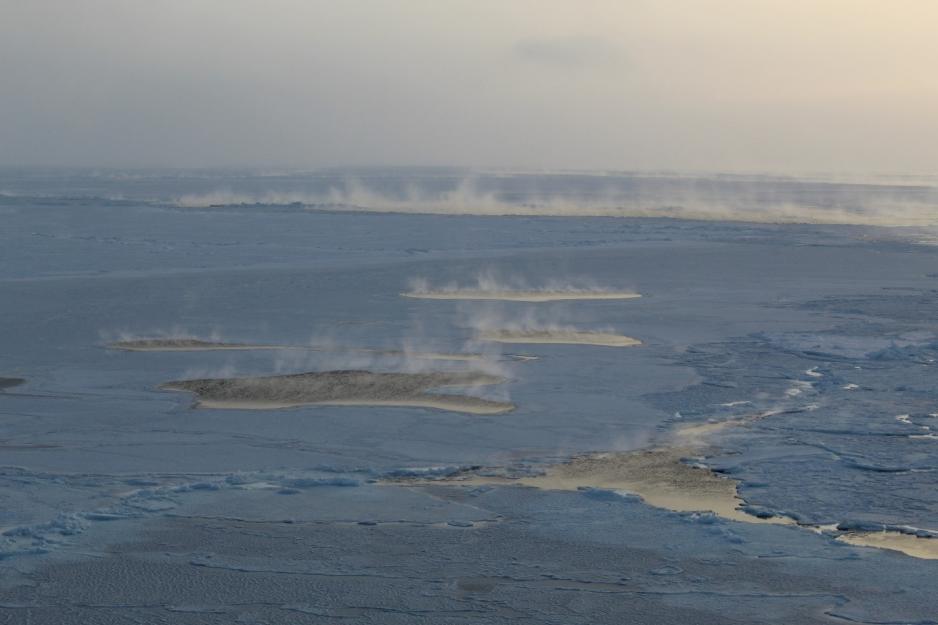 During a scientific cruise in March 2021, as a part of the Nansen Legacy project, sea-ice scientists had the opportunity to take a closer look at the sea ice situation specifically in the northwestern Barents Sea and the transition area to the central Arctic Ocean. Most of this area is rarely visited in late winter/early spring.

Sea ice in the area consisted mainly of first-year ice and young sea ice, not older than a few months, with average thicknesses of a bit more than half a meter. Despite relatively thin ice cover, a persistent stable and cold weather that preceded the cruise enabled a formation of large (up to a kilometer) ice floes. This ice was a convenient target for both the local scientific on-ice work as well as regional scale helicopter sea ice surveys.

On-ice sea ice physics and oceanographic work included measurements of ice and snow thickness, solar radiation levels above and below the sea ice, collection of ice samples, measurements of seawater properties through the entire water column from surface to near seafloor. While some of the measurements and sampling are done manually, other methods have automatic setups and remotely operated platforms. 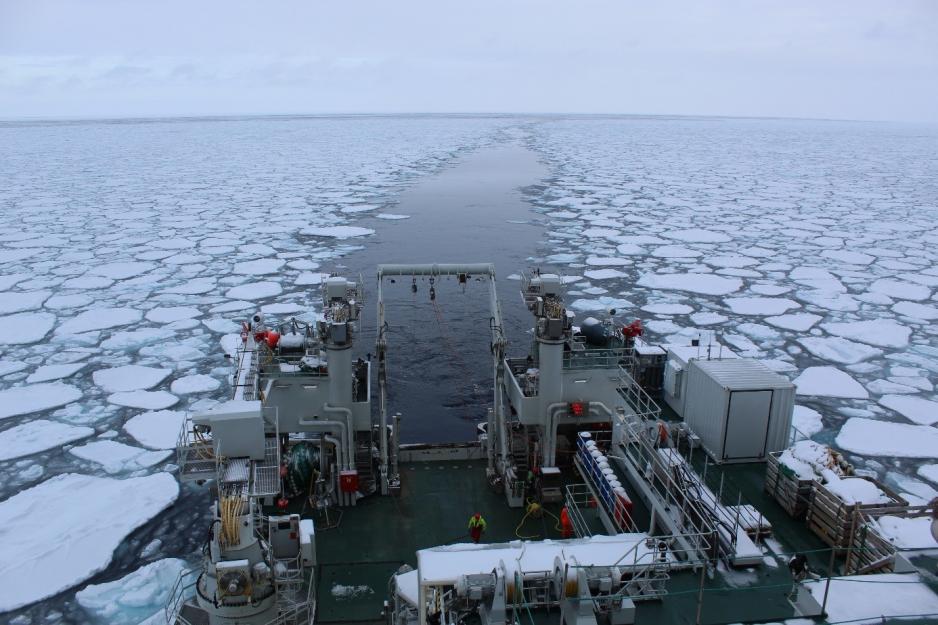 The on-ice, ship-based and airborne work components as well as the work planning and navigation of the research vessel were also supported by satellite imagery.

During the cruise the scientists could witness ice dynamics and wave-ice interaction first-hand. Waves triggered by a strong passing storm were visible deep into the sea ice covered area, dramatically transforming sea-ice scapes of the central to northern Barents Sea. Within a short time, the sea ice over larger areas was broken up into smaller floes of 10 meters or less in diameter.

In parts of the sea ice covered study area, the effect of relatively warm water masses was visible in form of sea smoke over leads and cracks, and this can explain also at least partly why the sea ice did not become thicker than it was, despite relatively low air temperatures at times down to -29 deg C.

Open water in an area where sea ice used to be present at this time of the year.

The largest difference in sea ice extent from “normal” could be observed straight north of Svalbard, with open water in an area where sea ice used to be present at this time of the year. Recent studies demonstrate that this area presently receives a significant amount of heat supplied by the Svalbard branch of the Atlantic water inflow.

The observed sea ice decline for winter in the area provides a clear evidence for this limb of the warm Atlantic water gradually extending further east and then deeper into the central Arctic.

The direct observations and collected ice, water and snow samples are now being processed in more detail, and the cruise from March and will be soon followed up with another expedition, repeating scientific work at the same positions, then focusing at the situation in spring.

Data and samples from sea ice physics and oceanography observations are also connected with observations done in other disciplines, specifically biogeochemistry and ecosystem studies.

Aliens in the Arctic

Into the deep unknown central Arctic Basin
Scroll to top