With sea ice decreasing, the Arctic Ocean will be more accessible to human activities.
“The scientific moorings deployed during the NPI Arctic Ocean 2022 cruise are the beginning of a long time series that is crucial for the best possible management of this region”, says chief scientist Paul Dodd.

With sea ice decreasing, the Arctic Ocean will be more accessible to human activities.
“The scientific moorings deployed during the NPI Arctic Ocean 2022 cruise are the beginning of a long time series that is crucial for the best possible management of this region”, says chief scientist Paul Dodd.

On the working deck of R/V Kronprins Haakon, four kilometres of Kevlar line are spooled up on a winch and advanced scientific instruments lie ready to go into the water. Small talk has subsided, all attention is focussed on the deployment of the Norwegian Polar Institute’s deepest and northernmost moorings. 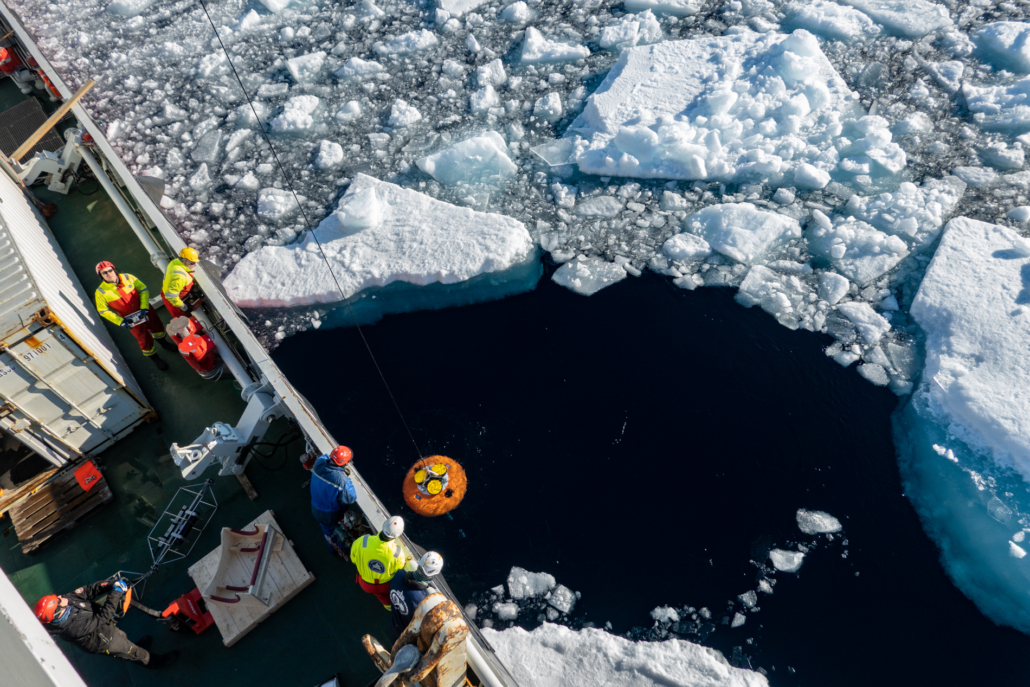 The Arctic Ocean 2022 cruise has reached the western part of the Amundsen basin, one of the four deep basins in the Arctic Ocean. This is the site for the first scientific mooring. The second one will be deployed further southeast, in the Nansen basin. The two neighbouring basins are separated at depth by the underwater Gakkel ridge.

“The mooring is held in position by a bottom anchor and is kept vertical by subsurface floats placed at regular intervals that lift the instruments and line”, says engineer Kristen Fossan who leads the mooring deployment operation.

Along the mooring line, Fossan and his colleagues are attaching scientific instruments to collect data from different depths of the water column, to capture the year-round characteristics of the sea ice drifting by at the surface, the water properties and circulation, and the species composition of the ecosystem. All components needed to understand the rapid changes of the Arctic Ocean.

RESEARCH ENGINEERS: Marius Bratrein and Kristen Fossan attach one of nine CTDs to the Nansen-1 mooring that will measure temperature and salinity in the water column over the next two years. Photo: Trine Lise Sviggum Helgerud, Norwegian Polar Institute

Even if the Arctic is getting warmer, it is still an extreme environment – cold, dark and ice-covered for large parts of the year. Observations in other seasons than summer, when the is at sea ice it’s minimum extent, require special effort and are usually very costly. So far, only a few expeditions have collected data in wintertime and even fewer have managed to collect sustained observations at one site for a significant period.

«The moorings are just the beginning of a long time series of sustained observations from the central Arctic Ocean. They will provide a comprehensive set of continuous measurements at two key locations, for an initial period of two years. Collecting year-round in-situ observations from fixed locations in this environment is unique and the instruments deployed during the Arctic Ocean 2022 cruise lay the foundation for an exciting new research program», says Dodd.

“We look after Norway’s interests by distinguishing ourselves professionally with a cruise with F/F Kronprins Haakon and launching rigs in the central Arctic Ocean,” says cruise leader and director Ole Arve Misund.

The marine ecosystem in the Arctic Ocean is understudied, but existing research suggests it will struggle under the large and swift changes expected in the sea ice and ocean properties.

“The theory is that the Nansen Basin is more ‘atlantified’ than the Amundsen basin”, Dodd says.

Atlantification describes the way that the Arctic Ocean gradually is getting more like the North Atlantic Ocean. The more warm Atlantic water enters the Arctic Ocean, the greater the probability that heat spreads to the cold polar waters at the surface and contributes to sea ice retreat.

In addition, Atlantification means that the Arctic Ocean could become warm enough to support Atlantic species. These could out compete the native arctic species that are highly adapted to cold conditions and sea ice. 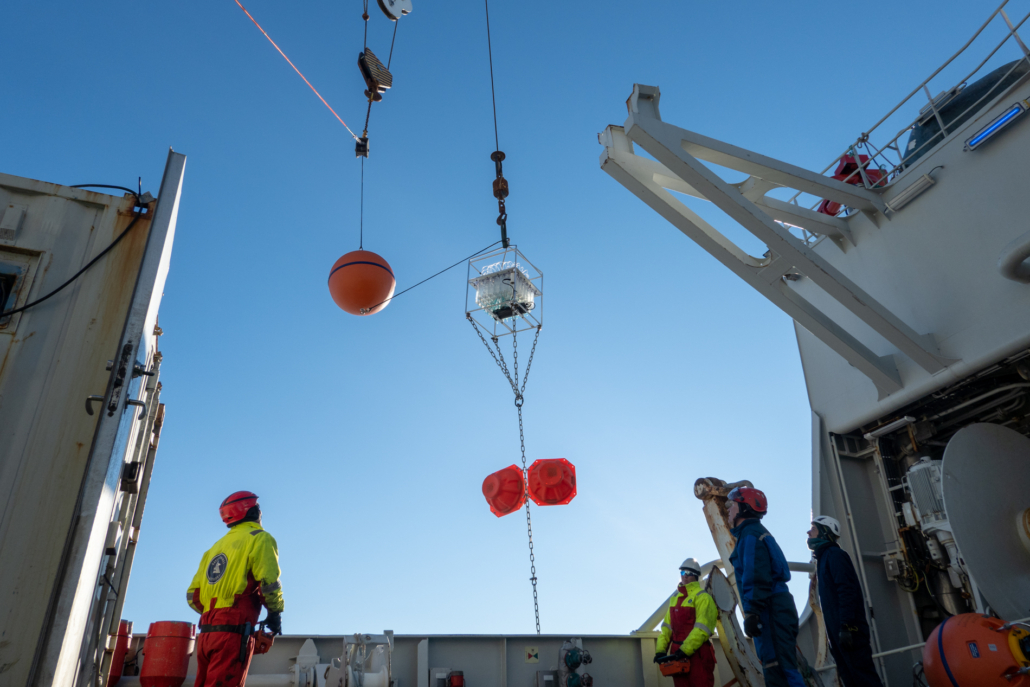 TWIN MOORINGS: “The new moorings will enable us to compare the Amundsen and Nansen Basins and how they are each affected by ongoing Atlantification. The answers will give us an insight into what the future Arctic Ocean will look like.” explains chief scientist Paul Dodd. Photo: Trine Lise Sviggum Helgerud, Norwegian Polar Institute

More ships are expected to venture into the Central Arctic

With atlantification and decrease of sea ice, previously inaccessible regions of the Arctic will be exposed to human activities.

“We expect an increase in ship traffic in the Arctic Ocean, including tourism, new shipping routes and perhaps eventually fishing activity. To manage the region in the best possible way, we need to map what is valuable and vulnerable. The mooring observations are needed to understand newly accessible parts of the marine environment and the ecosystem”, says Dodd.

Paul Dodd is leading the Fram Centre programme SUDARCO (Sustainable Development of the Arctic Ocean)*, which aims to establish the knowledge needed for the best possible management of the Arctic Ocean. Sixty-nine researchers and technicians from nine Fram Centre member institutions are participating.
To be able to give updated advice on management, SUDARCO works towards filling three knowledge gaps:

The mooring observations will contribute an important part of the knowledge base for SUDARCO, but also for other projects.

The scientific moorings are an extension of NPI’s instrument network in the Arctic Ocean. The Amundsen basin mooring is located 270 nautical miles upstream of the NPI Fram Strait moorings, where the institute has measured sea ice thickness and water properties for over 30 years providing one of the longest climate data records in the Arctic. The observations from the new northern moorings will be important for explaining the seasonal variations we see in the polar outflow at Fram Strait. 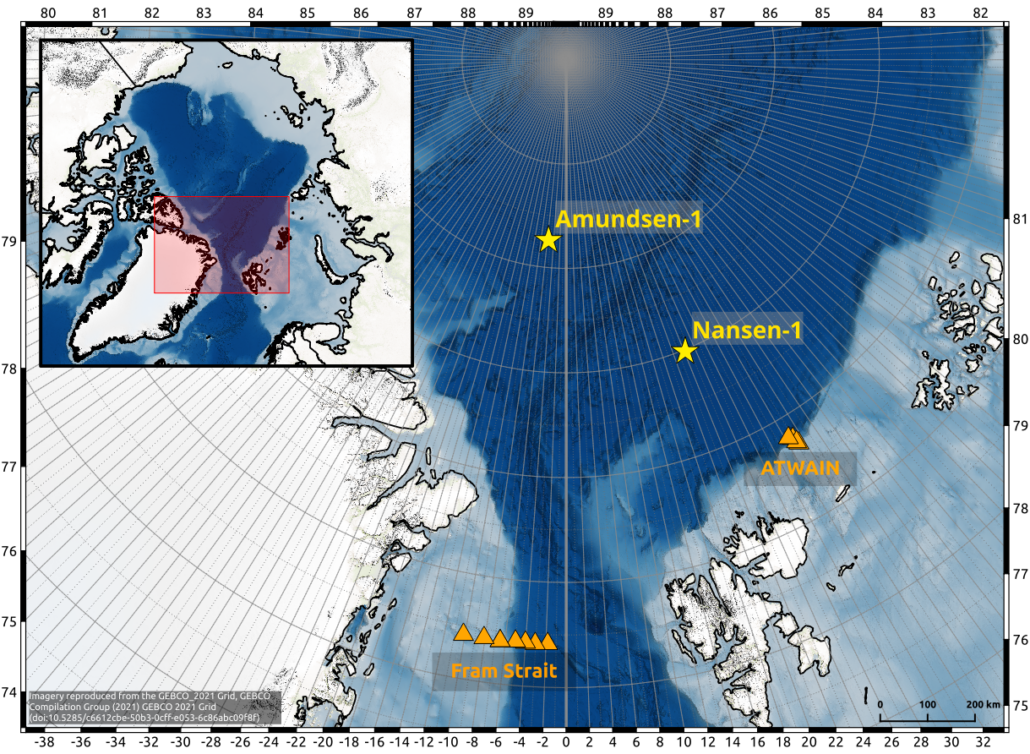 In addition, the new moorings are located in one of the focus areas of the new observational network which is under establishment in the EU Horizon 2020-project, Arctic PASSION. This project aims at improving the pan-Arctic observational capabilities through increased coordination and collaboration.

Deputy chief scientist on the cruise, Anna Nikolopoulos, is a science advisor for the Arctic PASSION with focus on the observatory in the Atlantic sector of the Arctic Ocean. She believes there is much to gain by ‘joining forces’ and focussing our observations in a few dedicated areas to increase the time resolution and the data overlap between different marine disciplines.

“The Arctic Ocean is changing at a faster pace than other places on Earth. The need for data from all components of the ecosystem is urgent. Our aim is to provide long term multi-disciplinary measurements with harmonized scientific methods to get a fuller understanding of the Arctic Ocean”, says Nikolopoulos. 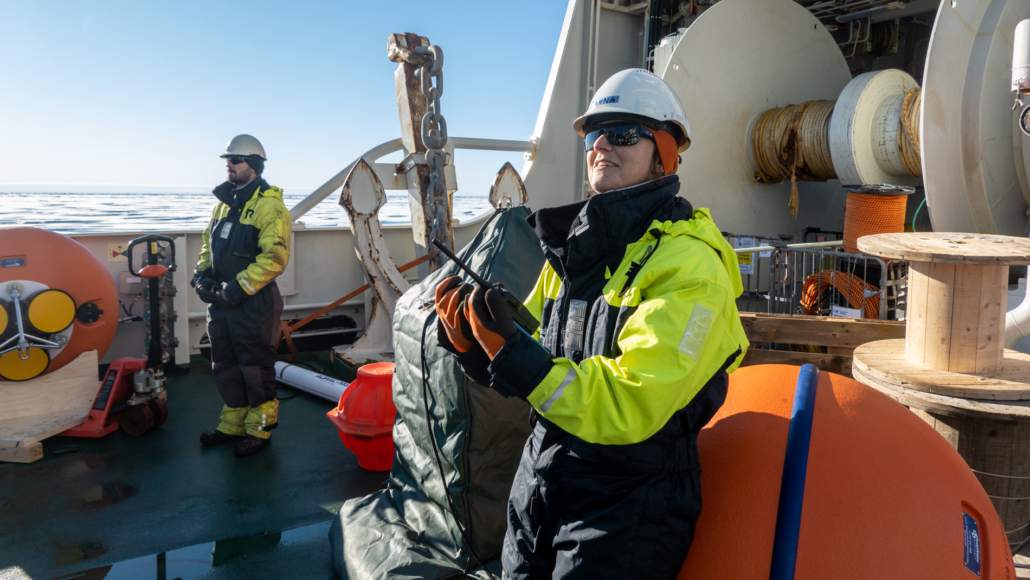 The instrument moorings in the Amundsen and Nansen Basins

Two moorings with a near-identical instrument set-up will enable comparison of the sea ice and ocean conditions in the central Amundsen and Nansen Basins, from August 2022 and two years forward. Four kilometres of Kevlar line holds all the instruments together. Here is what is measured by the many different instruments:

An Ice Profiling Sonar (IPS) is an type of echosounder directed upwards to recording the distance to the bottom of the ice, which is used to measures the draft of the sea ice that drifts over the mooring. The IPS sends out an echo every other second, which gives good information about the type and thickness of sea ice that passes by.

Acoustic Doppler Current Profilers (ADCPs) measure the strength and direction of the ocean currents. Each mooring holds two ADCPs that record the water motion in the upper 500 meters, where both the cold polar surface waters and the warmer Atlantic waters exist.

CTD sensors measure the temperature and salinity of the water which tells us what type of water we encounter at different depths and allow us to follow seasonal variations. The sensors are mounted from top to bottom of the mooring, and together they give us a depth profile of the water column.

A water sampler contains 48 sample bags which are filled with water according to a pre-set schedule through the deployment period. The water samples will eventually be analysed for environmental DNA (eDNA), which is found in remnants of organisms and can tell us which species were present in the water at the sampling occasion. A preservative is pre-added in each bottle to conserve the biological material over the entire deployment period.

A nitrate fluorometer (SUNA) measures nitrate, which is a nutrient in the water. The availability of nutrients in the water determines the growth of algae, plankton and fish. In the Arctic Ocean, lack of nitrate is often a limiting factor for the growth of phytoplankton.

An Autonomous Underwater Recorder for Acoustic Listening (AURAL) records sound for ten minutes every hour. We hope to hear the sound of species including narwals and bowhead whales but also the sound of cracking sea ice. Since there still is very little ship traffic in these regions, these measurements will function as ‘baseline’ measurements of the natural state of underwater sound in the Arctic Ocean.

An Acoustic release is placed at the bottom of the mooring and is the instrument we need to communicate with to release the mooring to the surface when the time comes to recover it. Every release has its own identity number and code which will be transmitted through a hydrophone to ‘wake-up’ the releaser and instruct it to release the anchor.

The bottom anchor is a tonne (1000 kg) of scrap steel that holds the mooring at the same location on the sea floor throughout the entire deployment period. Did you know that old train wheels often are used as anchors?

Notify
Deep insights into the Arctic of tomorrow