Two months in the drift ice

For nearly two months the fourth leg of the MOSAiC expedition has been working on the drifting ice from the German icebreaker Polarstern.

Benjamin Lange with AWI colleagues recovering instruments from the ice after the MOSAiC floe broke apart. Many instruments were frozen into the ice and still needed lot of manual work to be released from the ice. Photo: Laura Schmidt

For nearly two months the fourth leg of the MOSAiC expedition has been working on the drifting ice from the German icebreaker Polarstern. 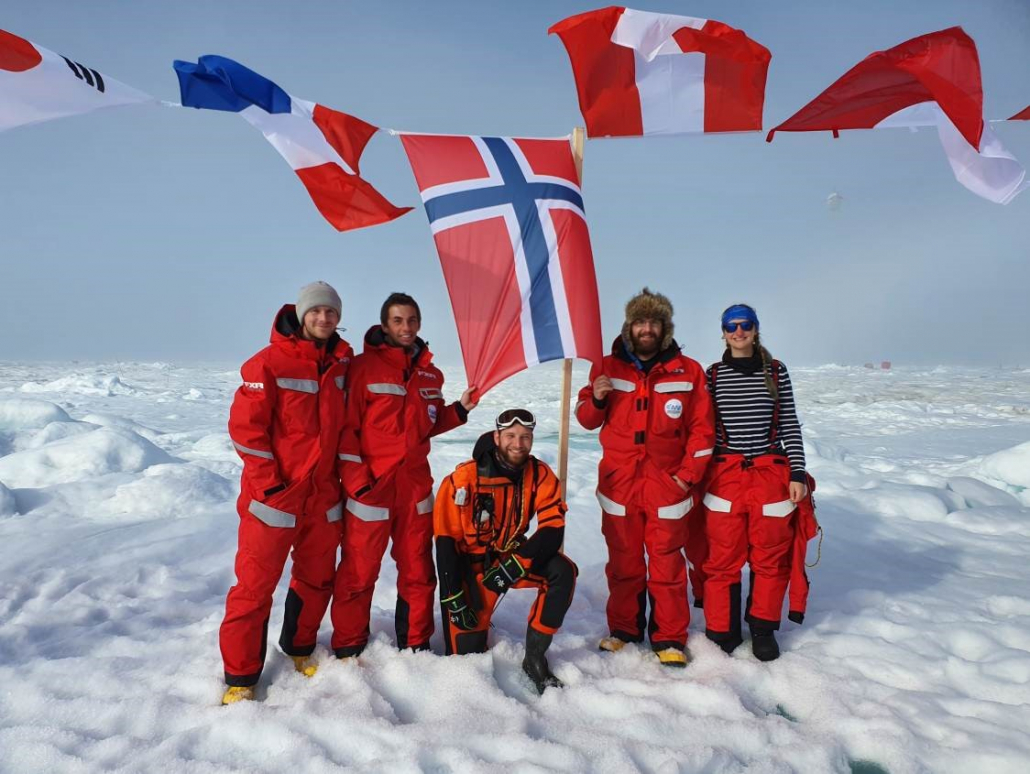 The HAVOC-team, from left, Oliver Müller (UiB), Evgenii Salganik (NTNU), Morven Muilwijk (UiB/NPI), Benjamin Lange (NPI) and Jessie Garder (UiT) during an open ice evening where all members of MOSAiC (including the ship crew) could go on the ice. The flags of all participating nations were hung on a line on the ice. Here the HAVOC team honours the country they represent, Norway. Photo: Jessie Gardner / UiT The Arctic University of Norway

The beginning of their journey was no easy task, in these covid-19 times, since for precaution all participants had to spend time in isolation and quarantine before transported to the Polarstern adding to the total time spent away from home. 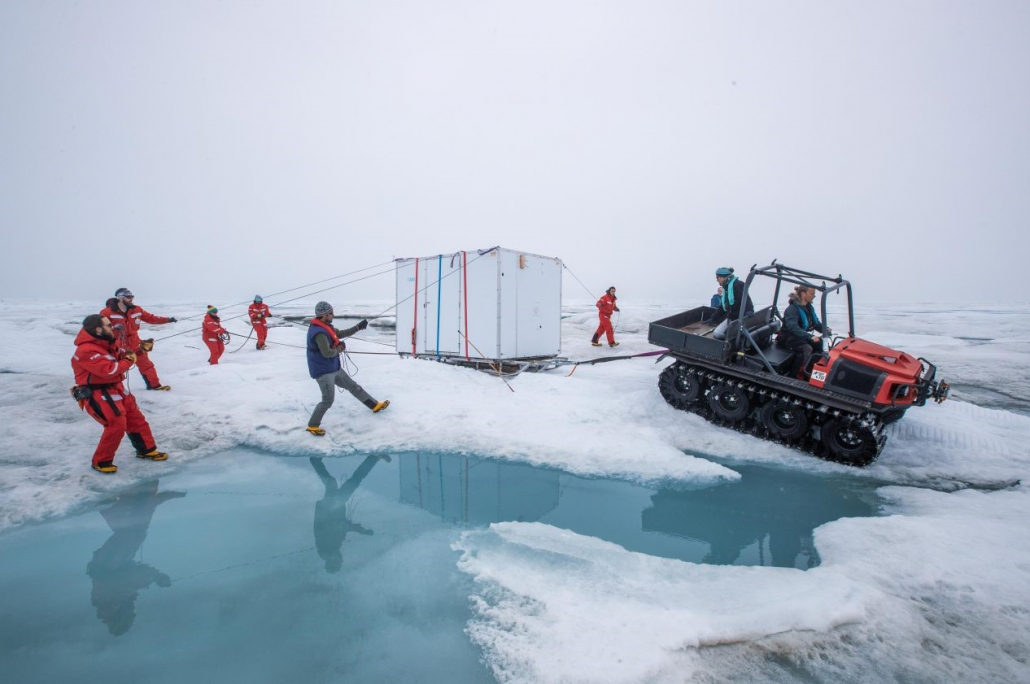 Benjamin Lange and Evgenii Salganik (among many other participants) helping to stabilize the ROV hut (an important component of HAVOC work) during recovery. Mel ponds forming on the ice makes it difficult in summer to travel on ice floes. Fortunately the hut was taken back to the ship, because the floe broke up less than 2 days later. Photo: Lianna Nixon / Colorado State University

During the two months, they have worked hard while the MOSAiC ice floe has drifted southwards to the Fram Strait, and eventually in end of July the ice floe had reached the ice edge and the floe broke up. Since then they have been recovering instrument that had been deployed in the ice. Soon they are on their way home on the Russian vessel Akademik Tryoshnikov that will transport them back to Germany in the coming weeks. You can follow the drift of the MOSAiC expedition here. 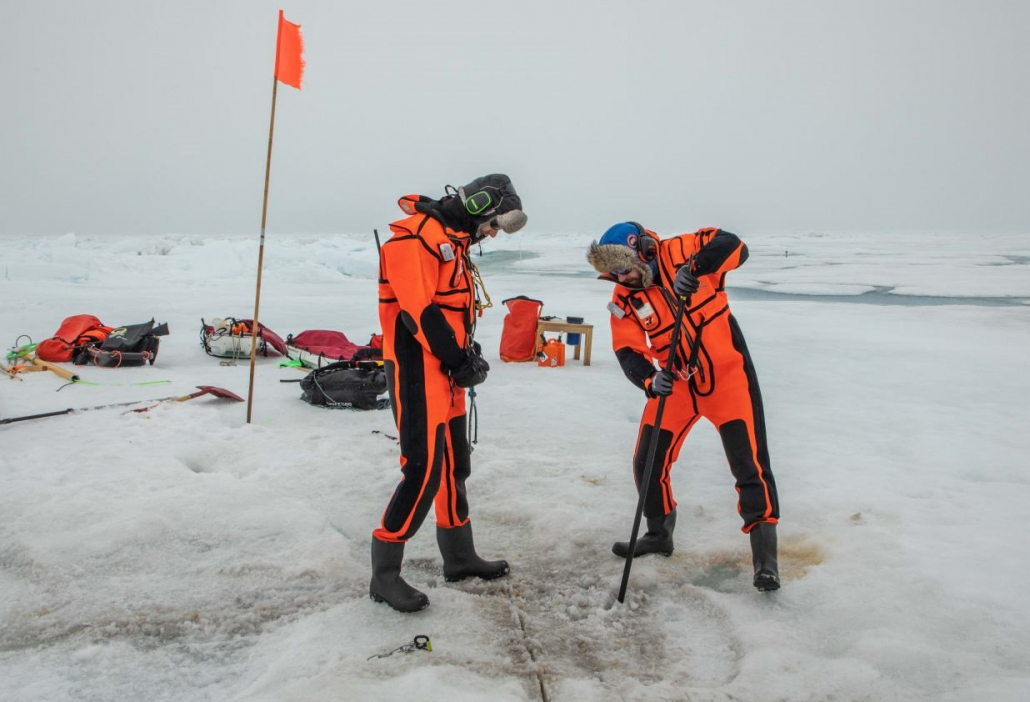 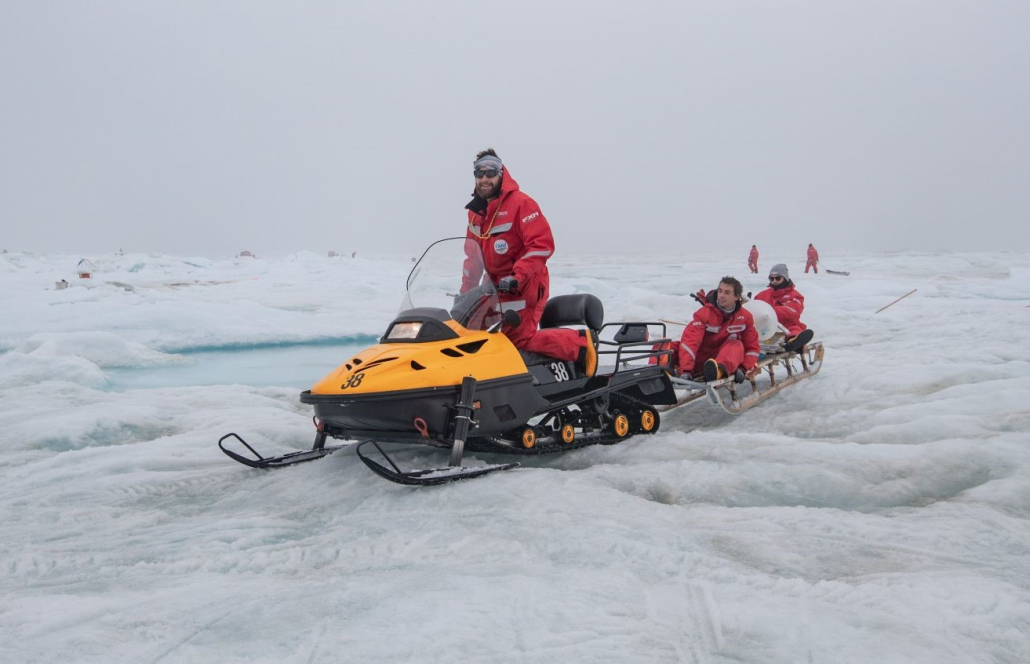 Benjamin driving the snowmobile with Evgenii and Felix riding on the Nansen sledge safe guarding some heavy equipment back to the ship during recovery. Photo: Lianna Nixon

The HAVOC team has been following the evolution of sea ice ridges and their role for the sea-ice ecosystem during the summer. Conditions have been challenging with melting ice, lots of fog and many curious polar bears. Being close to the ice edge the ice also very mobile and fragile. 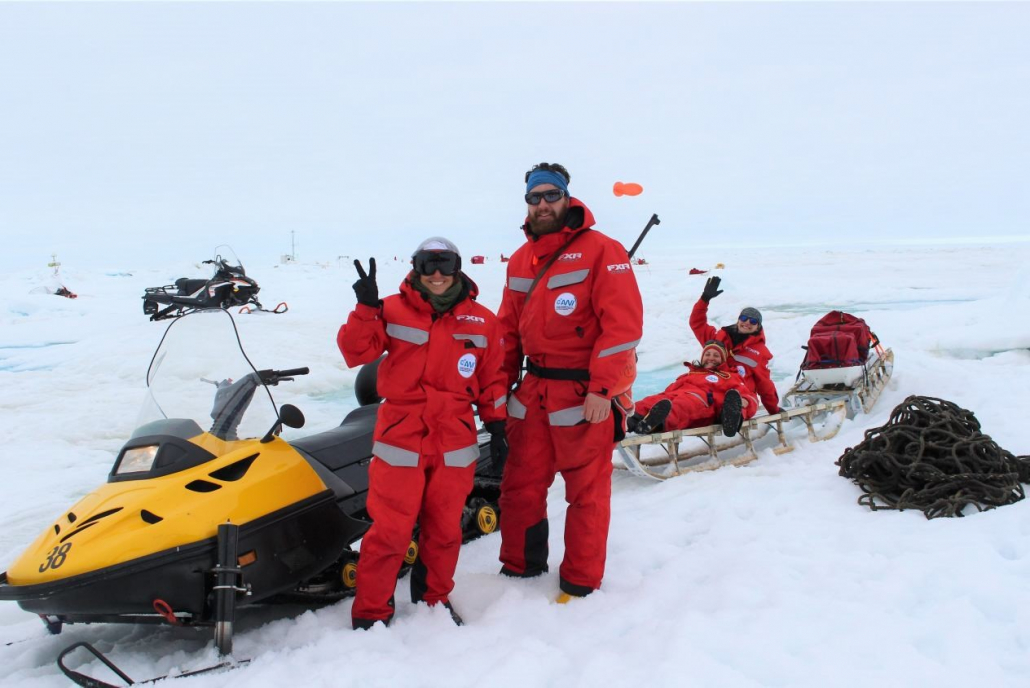 Giulia, Benjamin, Debby and Jessie (left to right) arriving back home after day of sea ice coring. Snowmobiles were used because the site was really far away and there was a lot of gear and ice cores to transport. Photo: Aikaterini Tavri 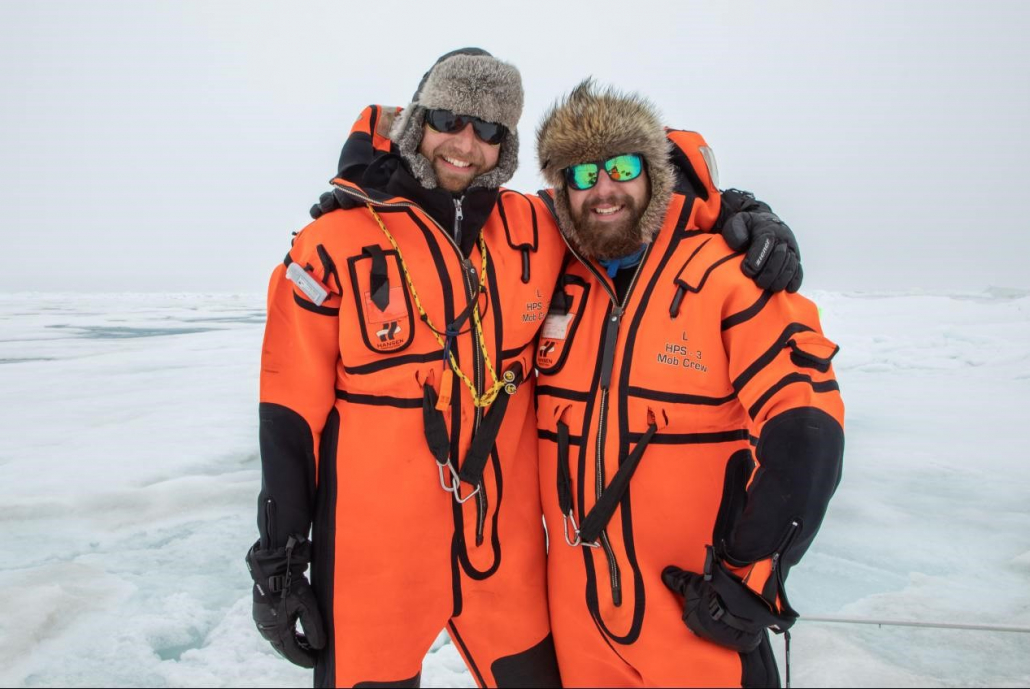 Benjamin and Morven on the ice at Fort Ridge taking a break during recovery of ADCP (unsuccesfully) at Fort Ridge. Photo: Lianna Nixon 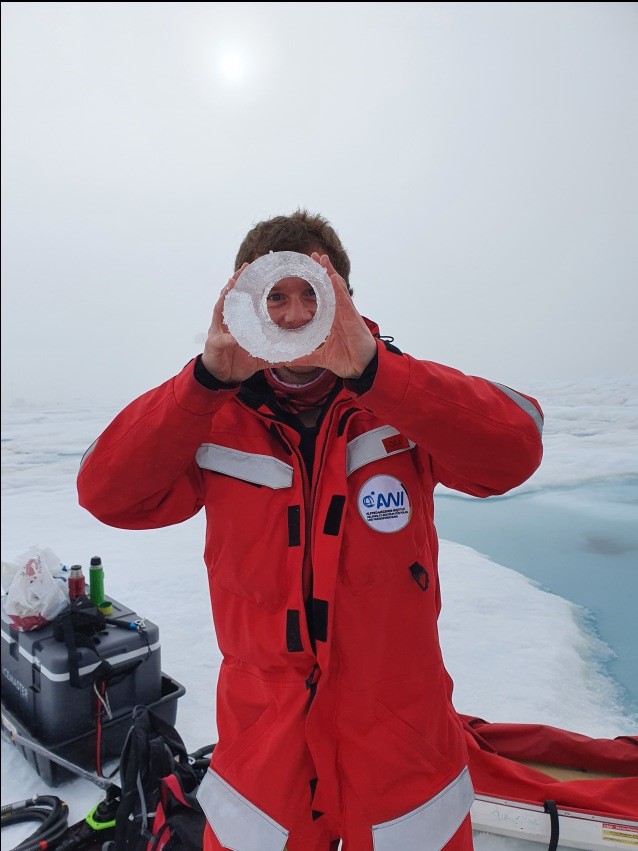 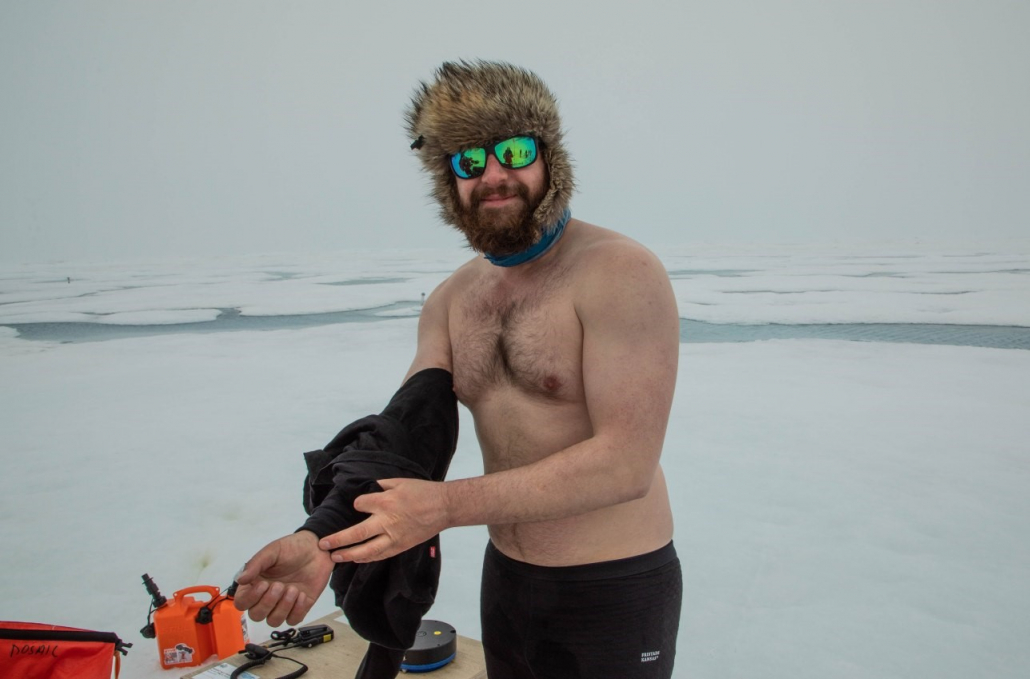 While working on the ice with survival suits, especially while cutting and breaking ice for the recovery of instruments, you get really sweaty. Here Benjamin’s clothing was really wet, fortunately he brought extra thermal clothes to change into in the field. Sweating can be dangerous while working in the Arctic even during summer when temperatures are relatively warm around freezing. Photo: Lianna Nixon 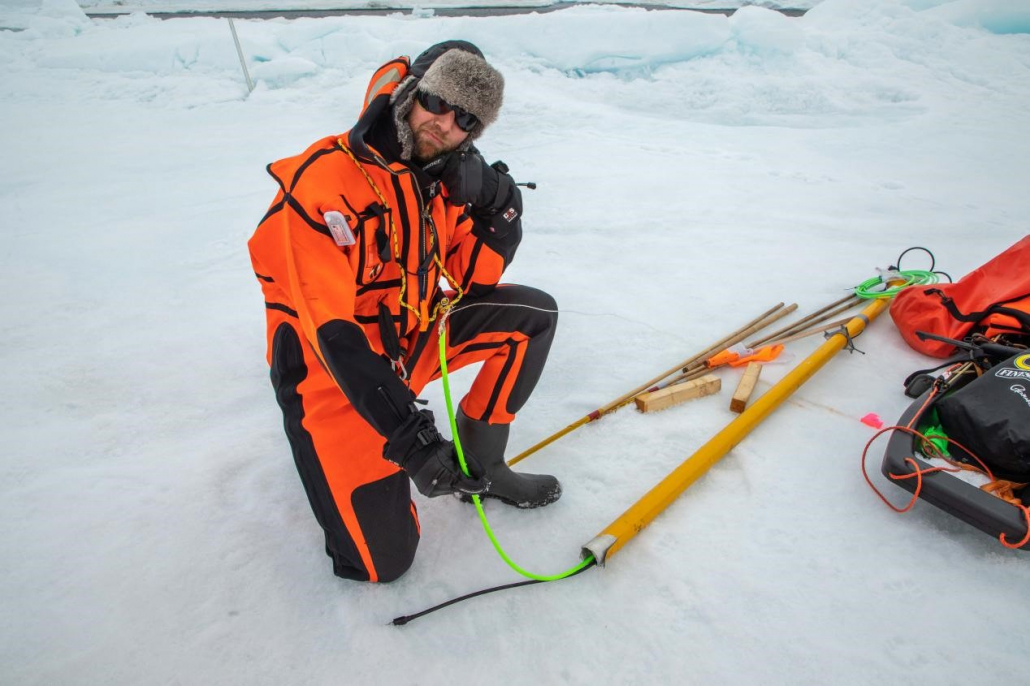 Morven looking puzzled by the ADCP pole and how it was cut. Needless to say, a rafting event sheared off the ADCP and CTD instruments from the bottom of the pole, making it impossible to recover since they were lost. All that remains are parts of the pole and cables that were connected to the instruments. Photo: Lianna Nixon

Spring is in the air! (or at least in the water)