HAVOC will study the role sea ice ridges play in the thinner ice pack in the Arctic Ocean. While the ice is getting thinner, the thicker parts of the ice cover are most likely to survive summer melt and provide the last habitat for ice-associated flora and fauna. The project will take part in the MOSAiC expedition.

HAVOC will study the role sea ice ridges play in the thinner ice pack in the Arctic Ocean. While the ice is getting thinner, the thicker parts of the ice cover are most likely to survive summer melt and provide the last habitat for ice-associated flora and fauna. The project will take part in the MOSAiC expedition.

The project is funded by the Research Council of Norway and supported by the Centre of Ice, Climate and Ecosystems at the Norwegian Polar Institute.

Ridges harbor key ecosystem functions in terms of habitat and food web components for sea ice, under-ice and pelagic flora and fauna in the central Arctic. Pressure ridges will become an increasingly important component of the new Arctic sea ice regime dominated by FYI where the largest portion of the level ice melts completely in summer.

The work is carried out in four main work packages (WPs), each of these will examine aspects of the sea-ice ridges that will then integrated into a unified picture of the evolution of sea ice ridges and their role.

The main work to be carried out during MOSAiC, will be to establish a sea-ice ridge observatory, and make regular interdisciplinary observations of sea-ice ridges throughout all seasons, using conventional observations, but also make use of new technology and instruments.

WP1: Evolution of the physical environment in and around sea-ice ridges

In this task we will map the evolution of sea-ice ridges and examine factors such as ocean currents (mixing, heat and nutrient fluxes) and light climate in and around sea-ice ridges to see how this habitat differs from the typical level ice that is studied during MOSAiC.

WP2: Species diversity and distribution as a result of habitat diversity within and below pressure ridges

In WP2 we will assess the processes that cause differences in the diversity of ice associated biota (from viruses, bacteria, to zooplankton and fish) )between ridges and level sea ice. How does the complex geometry of the ridge keels, with ice blocks and water filled gaps, affect the biodiversity of ridges versus the more exposed level ice. Observations over a longer season also allows to examine how the role of ridges changes with season.

In WP3 we will determine how food web and biogeochemical processes at the ice-ocean interface and the underlying water column differ between ridges and level sea ice, including bacterial and primary production, remineralization, proto- and metazoan grazing and vertical export in comparison with those of level sea ice.

And finally we will extend findings to regional and pan-arctic scales using local (conventional mapping and ship-radar), airborne (helicopter and fixed-wing) and satellite based observations and assess performance and improve representation of ridges in numerical models, especially for the role of the ecology of ridges. 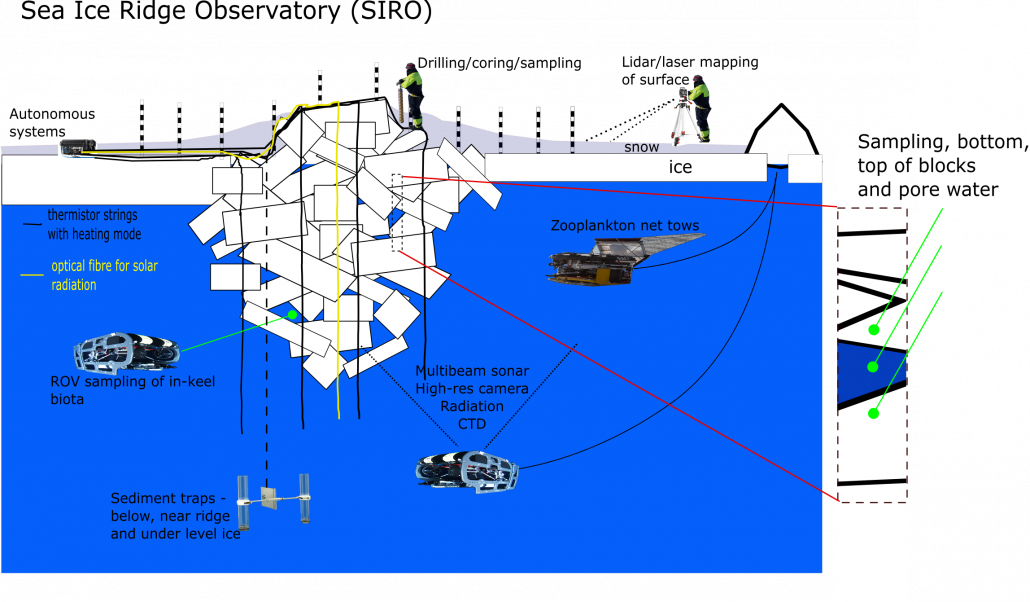 We will take part in the Multidisciplinary drifting Observatory for the Study of Arctic Climate (MOSAiC), an expedition that will drift across the Arctic Ocean in a similar fashion than the Fram expedition lead by Fridtjof Nansen in 1893-1896.

The backbone of MOSAiC will be the year round operation of research vessel Polarstern, drifting with the sea ice across the central Arctic from about October 2019 to October 2020.

Our planned work in HAVOC is partly based on the findings from N-ICE2015, with research vessel Lance, drifting in the pack ice north of Svalbard, but also gave us experience to participate and conduct such work in harsh conditions.