At the core of N-ICE2015 lies a multidisciplinary observational study on drifting Arctic sea ice from winter to summer in early 2015. By making these unique direct observations freely available to the research community, we help bring our knowledge up to speed with the actual situation in the Arctic, and ultimately improve our capacity to model the future.

The past decades have seen rapid change in the Arctic sea ice pack. The ice has become thinner and younger, and the older multi-year ice has been largely replaced by ice that is younger than 2 years old. These changes in the characteristics of the ice could suggests that the entire sea ice system is now functioning differently than before. This poses a fundamental question: Is the knowledge we have from only a decade ago still valid?

In order to predict the future of the Arctic sea ice, and its effects on the climate, ocean and ecosystems, we need good knowledge of the state of the system today, and an understanding of the governing processes of today and tomorrow. However, there’s a gap in our current knowledge: The Arctic sea ice has changed rapidly and dramatically in recent years, while at the same time our understanding is still based largely on observations made during an earlier regime, when thicker and older ice dominated the icescape in the Arctic Ocean.

The N-ICE2015 field campaign aims to address this knowledge gap, by contributing unique and needed direct observations to the global scientific community. Thus, the project is ultimately improving our capacity to model the future. 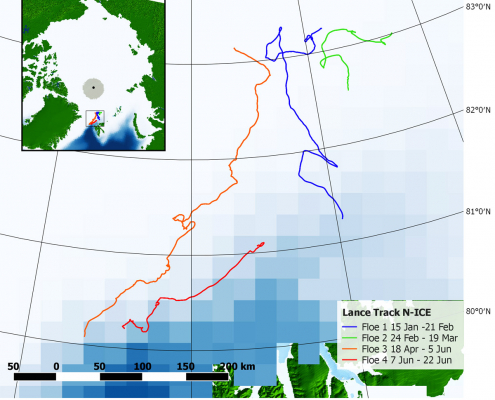 DRIFT PATHS: The 4 drifts undertaken during N-ICE2015 field campaign. The legend gives the start and finish dates for the each of the drifts. The northern tip of Spitsbergen is visible in the bottom. The pale white background is the ice concentration in May 2015 from NSIDC. Map: Mats Granskog / Norwegian Polar Institute

The expedition was carried out by taking the Norwegian Polar Institute’s research vessel Lance to 83°N 21°E and let her drift with the ice, with the ship as a research base for the personnel and the ice floes surrounding it functioned as a research camp.

Conditions were challenging. The ice drifted faster than expected, and was also very dynamic. As we approached the ice edge, the rapid ice drift and dynamic conditions caused the ice floes carrying the research camp to break up, and we had to evacuate the camp. This happened on four occasions, and every time we had to re-establish the drifting research camp (see map).

The ice pack consisted mainly of first- and second-year sea ice, with a thickness of around 1.3–1.5 m. This is representative of a thinner ice pack than what has been studied earlier in the Arctic. As such, we met the conditions for studying a thinner Arctic sea ice pack, the new Arctic.