On land grass and other plants provide ecosystems with food and play an essential role in binding CO2 from the atmosphere. Microscopically small plants called algae fulfill this role in the world’s oceans.

On land grass and other plants provide ecosystems with food and play an essential role in binding CO2 from the atmosphere. Microscopically small plants called algae fulfill this role in the world’s oceans.

As plants on land, these tiny algae depend on nutrients and sunlight for growth. Rising global temperatures have led to sea ice melt in polar seas, allowing more light to reach the algae in the seawater. Still researchers are unsure if sea ice melt will give a greener Arctic Ocean, supporting more marine life and increased fisheries.

Living in water and sea ice

Arctic marine microalgae (Figure 1) occur in two greatly different habitats. In addition to the water column microalgae (phytoplankton), sea ice provides an important habitat in the brine filled gaps between the ice crystals, contributing up to half of the total primary production to the Arctic system. Their combined production of organic substances fuels the entire ecosystem, from bacteria, herbivorous zooplankton to deep sea animals, seals, whales, and the polar bear. 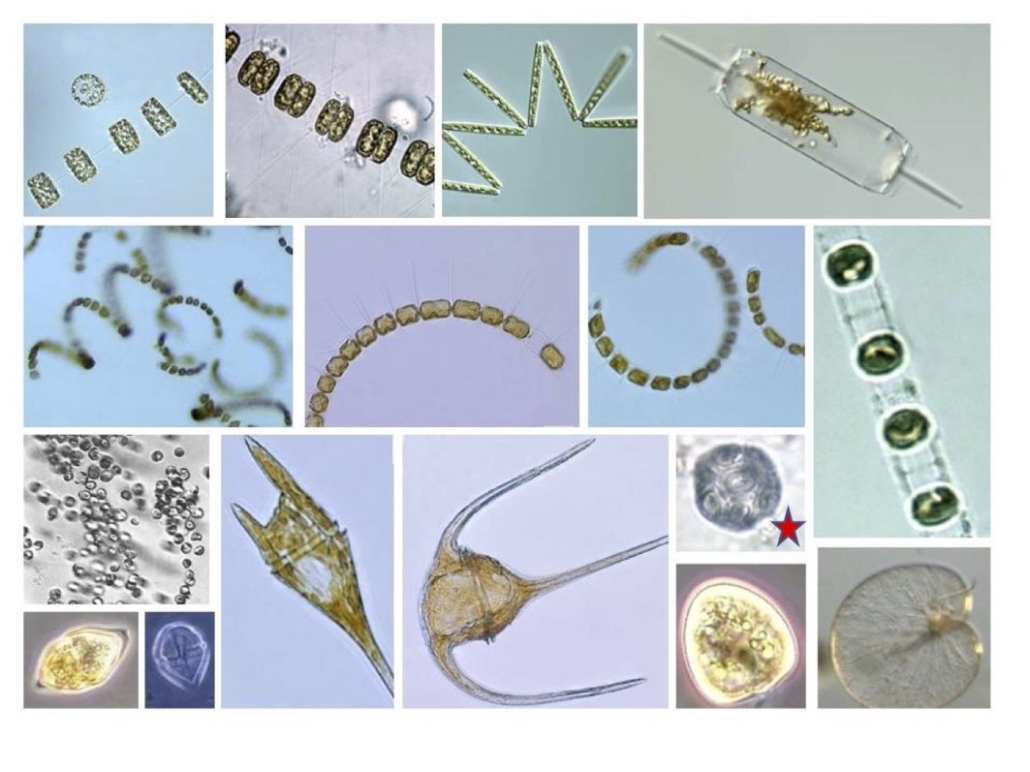 Arctic Seas are both desserts and lush pastures.

Algal production in Arctic Seas ranges from the very low productive central Arctic Ocean to the extremely productive shallow Chukchi and Barents Seas. The Arctic Ocean harbors a patchwork of different sub-systems which all have their unique environment. These environments have changed dramatically over the last decades. Indeed, the Arctic Seas are no longer remote near-natural systems. They are highly disturbed by increasing temperatures, decreasing salinities, loss of sea ice, ocean acidification, pollution, and stronger inflow from sub-Arctic Seas – all impacting the ecosystem. It is such changes that need to be measured, understood, and modelled to make useful predictions about the future of Arctic marine systems, including future potential fish catches.

It should not come as a surprise that the ongoing changes in the Arctic system have also already substantially changed the characteristics of algal production. Ice as an important habitat is disappearing at an alarming rate, and more and more of the algal production is contributed by phytoplankton, changing amount and quality of the algal biomass. Seasonality of algal growth has changed with phytoplankton blooms now observed under sea ice and intense blooms found also in fall and not only spring, which had not been observed 20 years ago. But how do these changes affect the Barents Sea ecosystem, and how do they link to changes in different parts of the Arctic? Our observational knowledge is still poor, and scientists do argue for both increasing, decreasing or constant primary production in the future Barents Sea – it is the balance of light, availability of plant nutrients, algal species, and growth as well as grazing and sinking as loss terms that determine the outcome and assumptions used in the different models. We do not know, which of the predictions correctly reflect the status of the future Barents Sea, as we deal with enormous uncertainties based on limited knowledge and the simplified model systems we have to use.

Research aimed at this difficult challenge is at the core of the Norwegian Nansen Legacy project. To tackle questions ranging from identifying the current inventories of microalgal species, determining their growth physiology, understanding the seasonality and fate of algal production and adjust ecosystem models to better predict the future of the Barents Sea marine food web requires teamwork by researchers and early career scientists from many Norwegian universities and institutions. This is a daunting task as we need to consider hundreds, if not thousands of different algal species, enormous seasonal and regional variability, and limited accessibility to the study area due to its remoteness. Some of these species are unknown, and Nansen Legacy scientists have already discovered species new to science (Figure 2). Observations of algal abundance from space can help, as the presence or absence of microalgae can change the color of the ocean (Figure 3). However, such observations are limited as they are obscured by the Arctic ice cover and frequent clouds and the long polar night. Therefore, going into the Arctic is for many of our research aspects still an absolute requirement. Alternatives like autonomous gliders or moored instrumentation can help with some measurements but cannot provide the complete inventory of information we need to understand the ecology of Arctic microalgae, specifically as many processes do occur within the sea ice connected to the Arctic food web. 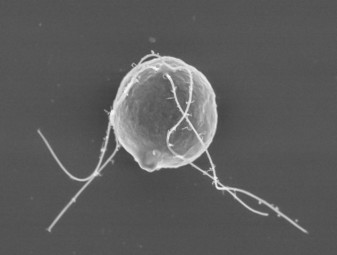 Figure 2: Some of these species are unknown, and Nansen Legacy scientists have already discovered species new to science. A new species of the green algae Carteria was collected from a melt pond on top of sea ice during a Nansen Legacy expedition. Photo: Luka Supraha, UiO 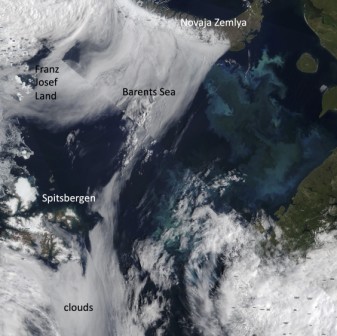 Figure 3: Algae can be observed from space as their presence or absence can change the color of the ocean. Satellite picture of a massive bloom of tiny algae called coccolithophores in the Barents Sea. Photo: NASA https://worldview.earthdata.nasa.gov).

Studies in the Barents Sea alone will not allow us to address this question. Arctic Seas are interconnected through transport of plant nutrients, species, water and sea ice and changes in one area can impact what happens hundreds of kilometers away. Therefore, a Nansen Legacy expedition on board research vessel Kronprins Haakon is currently sailing from the shallow Barents Sea shelf into the deep Arctic Basin, crossing different Arctic regions with strong and weak Atlantic influence, high and low nutrient concentrations, and high and low sea ice coverage (see first cruise blogs). Along these gradients of environmental settings, all relevant physical, chemical, and biological variables will be assessed to not only measure the rate of algal production, but also understand why such a rate is observed and why a certain species community is found.

Seven million microalgae in one liter of Arctic seawater

Microalgal composition is investigated directly onboard and has already revealed insights into the current status (Figure 4). We now know that the massive algal bloom, that the research vessel Kronprins Haakon has passed on its transit through the southern Barents Sea and that had changed the color of the ocean to its milky blue appearance (Figure 3), has been caused by a massive bloom of small flagellates with tiny carbonate plates on the cell surface called coccolithophores (see microalgal image marked with red star in Figure 1). Our current estimate is that there were ca. 7 million of these small flagellates in a single liter of seawater. These coccolithophores are known to be sensitive to ocean acidification and can have a strong impact on the marine carbon cycling. Understanding their summer occurrence and contribution to the food web is therefore important. 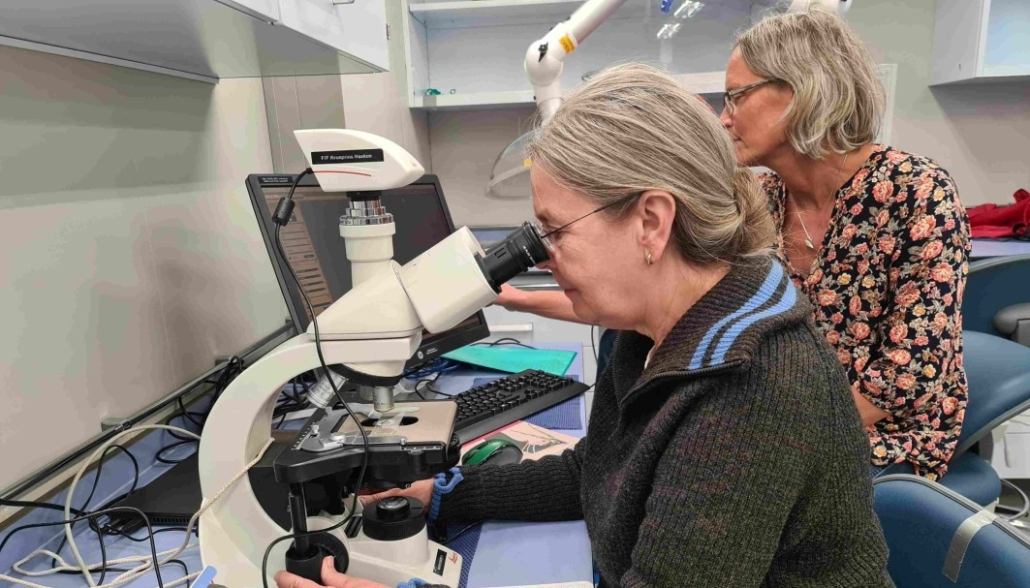 The productivity of the algae in sea ice and water will be studied using the addition of tiny amounts of the radioactive carbon isotope 14C as algal carbon source into the water (Figure 5). Algae will incorporate the 14C into their organic matrix and after short incubations of a few hours, the rate of incorporation and therefore algal productivity can be assessed. Furthermore, data relevant for model improvement (for example the response of algal growth to different light intensities) will be determined at all stations during this expedition. 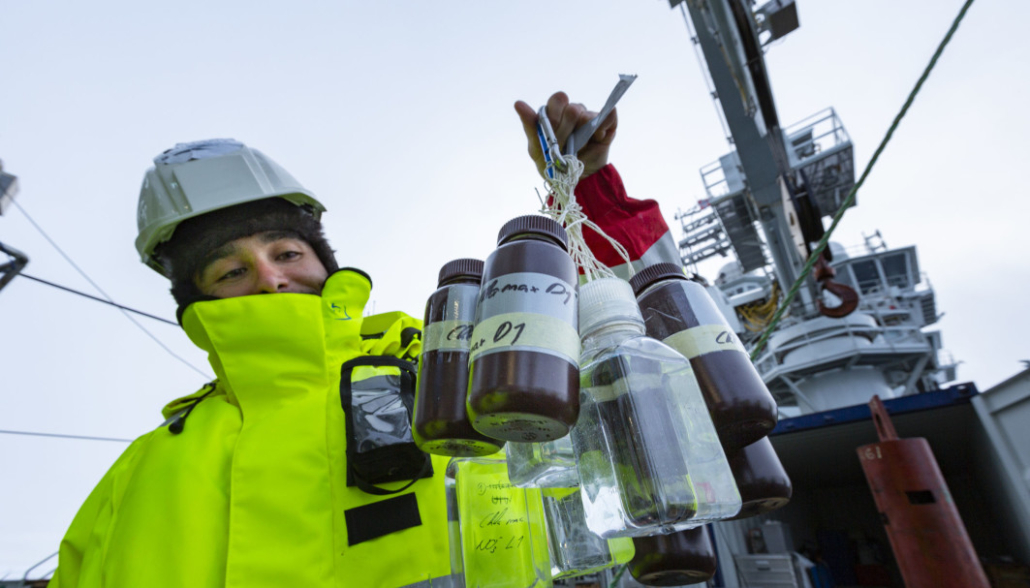 Figure 5: The productivity of the algae in sea ice and water will be studied using the addition of tiny amounts of the radioactive carbon isotope 14C. Marti Amargant, ready to deploy an in-situ primary production incubation. Photo: Christian Morel/christianmorel.net/The Nansen Legacy

These data will fill critical knowledge gaps for the Barents Sea and deep Arctic Ocean, not only on algal production but also for the entire food web and carbon cycle.

Nansen Legacy scientists do not work isolated but link their work within international research networks like MOSAiC (https://mosaic-expedition.org/) or SAS (https://synopticarcticsurvey.w.uib.no/science-plan/). The gained knowledge will directly be used in the Nansen Legacy and international modelling efforts, increasing the accuracy of the model output and our ability to better predict the future Arctic Ocean and sustainably manage its valuable marine resources.

Welcome to a journey through the Arctic!

This blog is written by researchers and participants linked to The Nansen Legacy Project.

They will share their experiences and knowledge from research cruises in the Barents Sea.
The research vessel F/F «Kronprins Haakon» gives unique opportunities to explore the rapidly changing climate and ecosystems in the Arctic.
To ensure a sustainable management of the Northern Barents Sea and the adjacent Arctic Basin throughout the 21st century a new knowledge base is required.
Read more blog posts from the Nansen Legacy Project Blog.